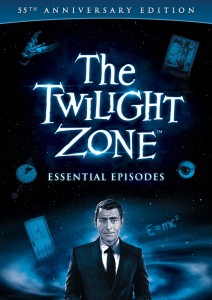 In what is being touted as a 55th Anniversary Edition (the show began in 1959), Image Entertainment has released a collection of seventeen of the best and most memorable episodes of the ground breaking television series “The Twilight Zone.”

Conceived by the great Rod Serling, “The Twilight Zone” was one of the first television programs that not only entertained but made you think about society and the choices made by the people in that society. It was also a show about irony. A book-loving bank teller finds that the world has been altered by war and finds himself surrounded by thousands of volumes in the local library. Then he breaks his glasses. Or the seemingly sane man who sees a gremlin on the wing of the plane he’s currently flying on. Or the man who goes for a walk in his old home town and discovers that, in the Twilight Zone, you CAN go home again.

Among the classic episodes included here include the three referenced above (“Tme Enough At Last,” “Nightmare at 20,000 Feet” and “Walking Distance.”) Other popular episodes in this collection include “To Serve Man,” “The Masks” and “The Monsters Are Due On Maple Street.” These episodes also boast casts made up of some of the most popular actors of the era (or those that would go on to be) including Shatner, Meridith, Ron Howard, Gig Young, John Carradine and Cloris Leachman.

These seventeen shows are a fine way to start your collection if you’re a “Twilight Zone” fan and a great way to discover one of the best shows ever put on television if you’re not.