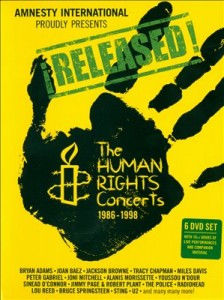 “Released: The Human Rights Concerts 1986-1998” is this the first ever compilation of the historic Human Rights Concerts which were presented by the Nobel Peace Prize-winning human rights organization Amnesty International from 1986-1998. Over those 12 years audiences around the world were treated to performances by a bevy of artists including Bruce Springsteen, Peter Gabriel and Sting amongst a long list of others. To coincide with the 25th anniversary of the “Human Rights Now! 1988 World Tour” Shout Factory released the complete 6 disc version of the concerts in November of 2013. With over 16+ hours of footage directed by Stanley Dorfman fans for the first time were able relive all their favorite performances and moments from those truly memorable shows. The footage is also accompanied by a 40 page full color booklet that includes photos and written firsthand accounts from the people who were there during these events. Probably my favorite disc of the 6 was the “Context on The Human Rights Concerts- Part 2” which featured some really great performances by Green Day, Mumford and Sons and Seal and Jeff Beck. Though I found a large portion of the footage to be a touch grainy due to its age the overall sound of the 6 discs proved to be quite good and made up for the visual shortcomings of the release. The impressive amount of footage and artist roster make this release a music lovers dream however it may be a bit cumbersome for just your average listener.

The latest version of the Human Rights Concert series titled “Highlights of Released: The Human Rights Concerts 1986-1998” was directed by John G. Smith and features select performances from the previously released 6 disc box set. Though the release sports a considerably stripped down program when compared to its predecessor viewers still get over 2 hours of footage with performances by The Police, Lou Reed and Bryan Adams along with an in-depth documentary featuring interviews with Sting, Pete Townsend and Bono. Though a number of the performances I enjoyed from the full release were left off this version I wasn’t too upset as there is only so much space to fill and it’s a select performance piece. The biggest thing is that the select portion of these releases is often times up to the director and/or producers to determine what they feel are the “best” pieces to include. This can certainly give a hit or miss element to a release like this but it seems like for the most part everything was a hit. If you were interested in the original release of these concerts however were a bit put off by the size or price you can now get a good taste of those memorable shows from a decade gone bye while supporting a good cause as both releases net proceeds will be given to Amnesty.