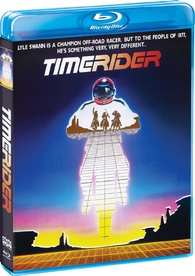 What really makes a cult classic? I remember seeing this film on the video store self when I was a kid. This 1982 cult classic has been out of print on DVD for many years now. Thanks To Shout! Factory it is finally getting a proper released on high-def Blu-ray. Fans are going to be thrilled with this release. If having it on Blu-ray isn’t enough, it also includes the complete and uncut version of the film. Now back to the cult classic question…this is not the best film ever it’s plot could be summed up in 30 minutes.  But if you love sci-fi, motorcycles and a kick ass score (thanks to Michael Nesmith, “Repo Man”) than you will love this film and understand why it is considered a cult classic.

Official Premise: Lyle Swann (Fred Ward) is a champion off-road racer who accidentally gets zapped into a time-travel experiment and sent 100 years into the past! When a gang of brutal bandits steals his motorcycle, Swann must outsmart the local cowboys and submit to the desires of a beautiful outlaw woman (Belinda Bauer). Armed with only his wits and a map from an Exxon station, will Lyle Swann survive the Wild West and get back to his future?

Shout! Factory delivered a very beautiful looking and sounding Blu-ray.  The 1080p transfer is amazing for a film that is over 30 years old.  The motorcycle racing footage is very clear and impressive. If you are used to watching this film on TV or VHS, you are going to feel like you are watching an entirely new movie. The audio track boasts an impressive DTS-HD 2.0 Master Audio, which is a real step up from the Dolby Stereo track.  The special features includes an audio commentary track with Director William Dear.  There are also new interviews with Producer Michael Nesmith and William Dear.  Lastly there is a Storyboard Gallery included.