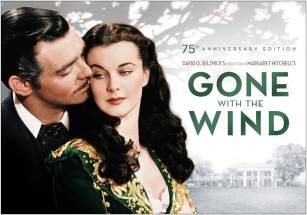 Burbank, Calif., June 3, 2014 – On September 30, Warner Bros. Home Entertainment (WBHE) will honor one of the most celebrated motion pictures of all time with the Gone with the Wind 75th Anniversary Ultimate Collector’s Edition on Blu-ray™ and Digital HD with UltraViolet.

Gone with the Wind — the quintessential Hollywood epic and still history’s all-time domestic box-office champion ($1.6 billion[1]), with more tickets sold than any other movie ever made – is a “must have” for classic film collectors. It will be fittingly presented in limited and numbered sets, with new collectible packaging, new enhanced content and new collectible memorabilia. The memorabilia includes a replica of Rhett Butler’s handkerchief and a music box paperweight playing Tara’s theme with an image on top of the Rhett-Scarlett kiss. Also included is a 36-page companion booklet featuring a look at the immortal style of Gone with the Wind, written by New York fashion designer and Project Runway finalist Austin Scarlett, whose signature look reflects the romantic elegance of the Gone with the Wind era.

The new special features include footage of Clark Gable and Vivien Leigh attending the original movie premiere in Atlanta and Old South/New South, a journey through today’s South, revisiting the real-life locations depicted to see how the world of the Old South continues to inform life in the New South’s cosmopolitan world. Gone with the Wind 75th Anniversary Ultimate Collector’s Edition will be available for $49.99 SRP.

To commemorate the 75th anniversary of Gone with the Wind, the Harry Ransom Center at The University of Texas at Austin will launch the exhibition, “The Making of ‘Gone With The Wind.’” For the first time in more than 25 years, three original gowns worn by Vivien Leigh as Scarlett O’Hara, including the iconic green curtain dress, will be exhibited together along with replicas of the film’s other gowns. Additionally, more than 300 items from producer David O. Selznick’s archive will be displayed, including behind-the-scenes photographs, storyboards, correspondence, production records, audition footage and fan mail. Turner Classic Movies is one of the sponsors of the exhibition which runs from September 9 – January 4, 2015.

On September 22, WBHE will partner with The Actors Hall of Fame in a special 75th Anniversary Gone with the Wind fundraising gala to benefit dramatic arts education in schools. Hundreds of stars and industry leaders will arrive ‘in costume’ at the historic Culver Studios where many key scenes of the movie were filmed. The gala will be streamed live from the Mansion on digital and social media around the world. Planned highlights of this special evening include the dedication of the Olivia de Havilland Dramatic Arts Education Center and a recreation of the famous Virginia Reel dance scene from the movie, with student actors in period costumes and a silent auction including Gone With The Wind memorabilia. For additional information on the events, go to www.hrc.utexas.edu and http://actorshalloffame.org/  respectively.

Gone with the Wind, lauded as one of the American cinema’s grandest, most ambitious and spectacular pieces of filmmaking, was helmed by Victor Fleming in 1939, the same year as the director’s The Wizard of Oz. It captured 10 Academy Awards®[2] including Best Picture, Best Actress, and Best Supporting Actress for Hattie McDaniel, the first Oscar awarded to an African-American actor. Margaret Mitchell’s Pulitzer-prize winning novel, on which the film is based, has been translated into 16 languages, has sold hundreds of millions of copies worldwide, and even now, continues to sell 50,000 copies a year.

Clark Gable, Vivien Leigh, Olivia de Havilland, Leslie Howard and Hattie McDaniel star in this classic epic of the American South. On the eve of the Civil War, rich, beautiful and self-centered Scarlett O’Hara (Leigh) has everything she could want – except Ashley Wilkes (Leslie Howard). As the war devastates the South, Scarlett discovers the strength within herself to protect her family and rebuild her life. Through everything, she longs for Ashley, unaware that she is already married to the man she really loves (Gable) – and who truly loves her – until she finally drives him away. Only then does Scarlett realize what she has lost … and tries to win him back.

Note: All enhanced content and premiums listed above are subject to change.

Academy Awards® and Oscar® are both registered trademarks and service marks of the Academy of Motion Picture Arts and Sciences.

Blu-ray Disc™ and Blu-ray™ and the logos are the trademarks of Blu-ray Disc Association.

Warner Bros. Home Entertainment (WBHE) brings together Warner Bros. Entertainment’s home video, digital distribution and interactive entertainment businesses in order to maximize current and next-generation distribution scenarios. An industry leader since its inception, WBHE oversees the global distribution of content through packaged goods (Blu-ray Disc™ and DVD) and digital media in the form of electronic sell-through and video-on-demand via cable, satellite, online and mobile channels, and is a significant developer and publisher for console and online video game titles worldwide. WBHE distributes its product through third party retail partners and licensees, as well as directly to consumers through WBShop.com and WBUltra.

ABOUT DIGITAL HD WITH ULTRAVIOLET