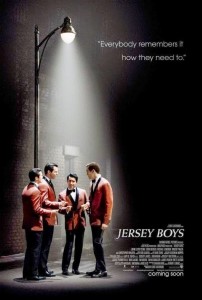 Ah, the 1950s. If you were Italian and lived in New Jersey you had two photos framed and hung on your wall: Pope Pius XII and Frank Sinatra. No telling who had more power…the Pontiff or the Chairman of the Board. We are introduced to a little band called the Variety Trio. Fronted by Tommy Devito (Piazza), his brother Nick and their friend, Nick Massi (Michael Lomenda), the boys do all right but are searching for just the right sound. Enter their friend Frankie Castelluccio, whose amazing voice fits the sound Tommy is looking for. When a friend of Frankie’s by the name of Joe Pesci (yes, THAT one, played well by Joseph Russo) introduces the group to his songwriting friend Bob Gaudio (Eric Berghen) things begin to take off. Now a foursome, the group adopt the name the Four Seasons and the rest, as they say, is rock and roll!

Directed by Clint Eastwood, “Jersey Boys” is a behind-the-scenes story of epic proportions. Even long-time fans of the group will be surprised to learn the obstacles that needed to be overcome for these four young men to reach the top of the charts. Eastwood has wisely kept the basic premise of the stage show, allowing each member of the group to act as their own “Greek chorus,” breaking the fourth wall and narrating the story as it progresses.

Young, who won a Tony award for his portrayal of Valli in the original Broadway production, hits all the right notes here, both dramatically and musically. He is strongly backed up by Lomenda and Berghen, who both appeared in touring productions of the show, and Piazza, whose bad boy Tommy has a good heart…and a bad problem with money. Walken has fun as Gyp Decarlo, the local mobster whose encouragement and support of Frankie and the boys extends to the underworld.

Though Eastwood keeps the story flowing, the film does have an occasional slow spot. I remember checking my watch 2 hours in and commenting to my wife “wow…he’s got at least four hits they haven’t mentioned yet.” However, as if Clint sensed my fidgeting, the film wrapped up nicely 15 minutes later.