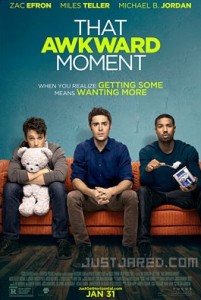 “That Awkward Moment” is the latest attempt at a bromantic comedy. I feel arthritis settling into my wrists as I type that prefix. Recent comedies and romances are trying to find the more affectionate and passionate side of males. It’s an attempt to break down the walls of gender and show that men can be hurt, endure love and loss and attempt to fill that emotional void by eating a pint of ice cream. If you’re reading this, you’ve probably experienced the pains of relationships and some of you have lost at the game called marriage. “That Awkward Moment” thinks it’s tackling relationships in a fresh way, but instead feels like a horrendously sexist retreading of every romantic movie you’ve seen before.

Mikey (Jordan) has just recently found out his wife has been cheating on him. His marriage is crumbling and he can’t quite face the facts. So he turns to his two best friends, Jason (Efron) and Daniel (Teller). Unlike Mikey, the only character in the movie who shows signs of thought and concern, Jason and Daniel are on the complete opposite end of the spectrum. They still go to the bar and pick up chicks for a one night stand. Daniel even has a girl to help him be his wingman. At some point between the terrible jokes and predictable story, the three make a pact to not get into a relationship. I can’t believe I just witnessed that. I just watched a movie justify the character’s motivations, to sleep with random drunk girls they meet at the bar, by saying it’s for their friend who’s going through a divorce. That flimsy, barely mentioned pact, is what causes the main characters to display a failure of commitment towards the women they fall in love with in this movie. Mikey tries to reconcile with his wife, Daniel falls for his wingman(obviously) and of course Jason meets a quirky girl to fall for. And this pile of garbage just expects us to just go with it….for thousandth time in movie history.

Jordan and Teller starred in a pair of my favorite movies last year, “The Spectacular Now” and “Fruitvale Station”. To see them go from the top of their game to trying their best quick fire Judd Apatow liners about the color of a penis is a head shakingly bad drop off. After going home to look up who would ever put a pen to paper over this movie, I found out that it was on the 2010 Hollywood Blacklist. A list considered to be the best unproduced screenplays. So what the hell happened? My best guess is that the script was one page and simply said, “I have an idea that involves Zac Efron going bare ass”. But seriously, I think that none of these actors have comedic timing, but it’s not like any of the jokes were going to really cause side splitting laughter with the right talent. Even when the joke should be done, it continues flailing manically like a train off the tracks before crashing into a theater of silence.

There are no twists and turns, which gave me plenty of time to think during this dumpster fire. I managed to play out the rest of the movie in my head before it happened. I waited for their chauvinistic schemes to fall apart followed by the proverbial get back together happy ending trap all these movies have. It’s not entirely too easy to hate this movie because the actors are in this are easy to like. They’re just portraying unlikeable people. These people would be tolerable if you actually felt like there was some camaraderie and emotion behind them discovering that they’ve reached that special age where they want something more. Even if this movie was fine tuned, it’d still feel like it’s sputtering along for 94 minutes. Instead you’re left with this. And then comes that awkward moment where you ask the ticket taker if you can get a refund.