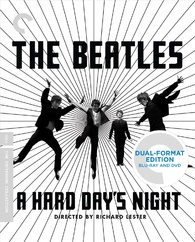 The Beatles is one of the best bands EVER. They have changed pop culture forever. Their music is eternal and will never be forgotten. I can sum this Blu-ray up in one word…SPECTACULAR. If you are a Beatles fan, you NEED this release. If you don’t have a Blu-ray player, go out and buy one! “The Beatles: A Hard Day’s Night” was released on Blu-ray back in 2009 to a pretty poor release. If you felt burned that one all you need to know is that this is being released under the Criterion Collection and that means perfection. The music in this film is just so amazing. Tell you that you don’t belt out these classic Beatles tracks like “A Hard Day’s Night”, “Tell Me Why”, “If I Fell”, “And I Love Her”, “Can’t Buy Me Love”, and “I Should Have Known Better” while watching or even thinking about this film.

Official Premise: In 1964, the Beatles had just recently exploded onto the American scene with their debut on “The Ed Sullivan Show.” The group’s first feature, the Academy Award-nominated “A Hard Day’s Night,” offered fans their first peek into a day in the life of the Beatles and served to establish the Fab Four on the silver screen, as well as to inspire the music video format.

Criterion is releasing this as a Blu-ray + DVD combo pack. The film itself has been recently given a spectacular 4K restoration from the original camera negative for this Blu-ray. Presented in an aspect ratio of 1.75:1, I cannot stress how stunning this transfer looks. 5/5 stars is simply not high enough. Also this release is also director approved, so you can not just take my word but also Richard Lester’s word. The black and white is so sharp looking and you couldn’t tell that this was shot nearly 50 years ago.

Since The Beatles are obviously known for their music, the audio tracks on this release are very important. There are a few different tracks on this Blu-ray. My favorite has to be the LPCM mono track. It is extremely clear and the songs are very well balanced. When I cranked up a few of the songs, they just sounded absolutely perfect. Same goes for the dialogue in the film, it sounded great as well. There is also a new DTS-HD Master Audio 5.1 track, which was made by Apple Records. Personally, this track works best with the songs, of course. Both very impressive and two different experiences, to be honest.

The special features are jam-packed and quite outstanding for this release. “Anatomy of a Style” feature story editor and screenwriter Bobbie O’Steen and music editor Suzana Peric discussing the film’s music sequences including “A Hard Day’s Night”, “I Should Have Known Better”, “Cant Buy Me Love”, “And I love Her” and “She Loves You”. “In Their Own Voices” includes behind-the-scenes stills and footage from the making of “A Hard Day’s Night” as well as clips from audio interviews a few of the Beatles. “You Can’t Do That: The Making of A Hard Day’s Night” is the 1994 documentary, produced by Walter Shenson (producer of “A Hard Day’s Night”) and narrated by Phil Collins featuring cast/crew from the film and runs just over an hour.

“Things They Said Today” is a  documentary from 2002 that focuses on long term success of “A Hard Day’s Night”. “The Running Jumping & Standing Still Film” is a short film that was shot by Richard Lester in 1959 and features Richard Lester, Peter Sellers, Spike Milligan, Graham Stark, and Bruce Lacey. “Picturewise” is a  new video essay focuses on the production history of “A Hard Days Night” and Richard Lester’s directing style. This was written and produced by critic and filmmaker David Cairns exclusively for Criterion. “The Beatles: The Road to A Hard Day’s Night” is a new video interview with Mark Lewisohn, author of “The Beatles: All These Years, Volume 1 — Tune In”, which was also conducted exclusively for Criterion in 2014.

But wait, there is still more…there is an audio commentary track from 2002 created from material produced by Martin Lewis and features actors John Junkin, David Janson, and Jeremy Lloyd; cinematographer Gilbert Taylor; associate producer Denis O’Dell; second assistant director Barrie Melrose; assistant editors Pamela Tomling and Roy Benson; and others. There are two trailers including the 2000 re-release and the 2014 re-release.  Lastly there is an fantastic illustrated booklet featuring an essay by critic Howard Hampton.