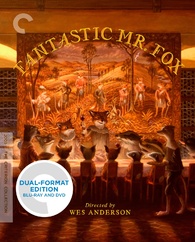 Even since I was a kid, I have been fascinated with the work of Roald Dahl. When I heard that Wes Anderson was going to give his unique approach to the “Fantastic Mr. Fox” story of with stop-motion puppets, I couldn’t have been more excited. The film is so much fun and speaks to both kids and adults. You can see how much work went into each second of the film and it is just amazing. It also includes an amazing voice cast with George Clooney, Meryl Streep, Jason Schwartzman, Willem Dafoe, Michael Gambon and Bill Murray. Every time I watch this film it only get better. Easily my favorites and finally it is given the Blu-ray treatment it deserves thanks to The Criterion Collection. This is a must own for any fan of this film!

When I see that a film is getting a The Criterion Collection release, you know that it is going to be taken care of. With “Fantastic Mr. Fox”, it actually did receive a solid Blu-ray release back in 2010, so I was very curious to see how they were going to one-up that release. Well, I was not let down at all with this new digital master, approved by director Wes Anderson. It has never looked better. The stop-motion animation really strives with the brilliant colors which are presented so beautifully. The DTS-HD Master Audio 5.1 audio also with the fantastic score from Alexandre Desplat. It is well-balanced surround track and also a nice improvement from the previous release. Literally blown-away!

This Criterion Collection comes stocked with one Blu-ray and two DVDs for the film, with all content available in both formats. Now that is a real treat, so you have various options when wanting to watch this. Another great treat included is a a booklet featuring a new essay; a 2002 article on Dahl’s Gipsy House by Anderson; White Cape, a comic book used as a prop in the film; and drawings, original paintings, and other ephemera. I think companies have forgotten what it is like when you used to open a DVD or Blu-ray case and actually find a booklet or pamplet in there. Nowadays, it is bare-bones usually. Thankfully, Criterion holds that tradition and continues to deliver even outside of the film’s presentations.

If you own the 2010 Blu-ray from 20th Century Fox already, be advised that this new Criterion Collection comes stocked with great new extras not available on Blu-ray previously. Firstly, there is a very fun and interesting audio commentary with Wes Anderson. There are storyboard animatics for the entire film, this is a MUST watch! There is great footage of the actors voicing their characters, puppet construction, stop-motion setups, and the recording of the score. There are interviews with cast and crew. I am huge fan of stop-motion animation and I loved watching the puppet animation tests, it is really amazing (and very hard) work!

There is a fantastic photo gallery of puppets, props, and sets. There the Animated awards acceptance speeches. My favorite is an audio recording of author Roald Dahl reading the book on which the film is based. There is gallery of Dahl’s original manuscripts, this was really neat to get to dive into. There is also an interesting and in-depth discussion and analysis of the film. I think this film deserves a good discussion because even though it might be considered a kids film since it is animated, it really isn’t completely. Lastly there is the Stop-motion Sony robot commercial by Wes Anderson rounding out the extras.