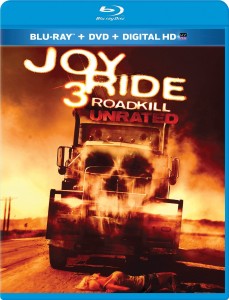 Rusty Nail has really become a great icon in the horror world. He is not at the level of Freddy Krueger but he definitely kicks some ass. I am sure this wasn’t planned (I hope) but since the death of Paul Walker (who starred in the first “Joyride”) was only a few months ago, it feels a little odd for this to be coming out right now. After the terrible follow up “Joy Ride 2: Dead Ahead”, “Joy Ride 3: Road Kill” is action-packed, entertains and is worth checking out if you enjoy this character and the series.

Official Premise: This third hellish installment in the bloody series finds director Declan O’Brien in the driver’s seat for another deadly detour. The nightmare begins when a group of young street racers take a desolate shortcut on their way to the Road Rally 1000. But a chance encounter with Rusty soon turns deadly as he stalks, taunts, and tortures his next victims with deranged delight. It’s a full-throttle, pedal-to-the-metal chill ride packed with killer twists and turns!

Fox is releasing this film as a combo pack with a Blu-ray, DVD and Ultraviolet Digital Copy. It is also releasing it with a Limited Edition Killer Packaging. The 1080p transfer and DTS-HD Master Audio 5.1 track works for what the film is, which is a low-budget gritty horror sequel. There are some decent special features including some Pre-Vis Sequences. “Road Rage: The Blood, Sweat and Gears of Joy Ride 3” is a look into the production. “Riding Shotgun with Declan: Director’s DIE-aries” is a chat with the director Declan O’Brien. Lastly, we have a featurette “Finding Large Marge” and an audio commentary track.