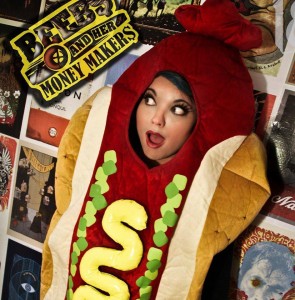 Michelle Beebs is the lead vocalist for the funk/ska band Beebs and Her Money Makers. The group was featured heavily on the Fuse Channels original series “Warped Roadies” and have been burning up stages across the U.S. ever since. The group recently released a brand new studio album titled “The Wurst Album Ever” and is set to take over the Journey’s stage as part of this year’s Warped Tour line up. Media Mikes had the pleasure of speaking with Beebs recently about the new album as well as about the impact of being on “Warped Roadies”.

Adam Lawton: What can you tell us about the band’s new album?
Michelle Beebs: Honestly it’s the worst album ever! (Laughs) We didn’t put a lot of effort in to it but we did what we could. (Laughs)  It’s a really fun album that I think everyone is going to really enjoy. We have been on this sort of ska frenzy lately so there is quite a bit of that on their mixed in with some funk as we certainly are a funky band. We also included a cover of TLC’s “Waterfalls” on the record which was a lot of fun to work on.

AL: Were you working on this record while being out on the road this past year?
MB: We were writing while we were out on tour and as soon as we got home we just started compiling everything. We found that the songs you work on the most tend to be the ones that suck while the ones that come together pretty quickly tend to be more fun. We work pretty fast and generally end up with songs that are really poppy and catchy. The ones that we decide to put to the side and go back to later generally don’t make it.

AL: can you tell us about the video for “Out the Door” and what made you decide to choose that particular song?
MB: We had originally planned to release a video for “Death to Ego” first but last minute we switched it to “Out the Door”. We just weren’t quite sure if the world was ready for that much funk at once. Our drummer Paul actually directed the video and I got to drive the coolest car ever. I wish I could have kept that car but they wouldn’t let. I keep trying to wear them down so I can have it. I have found that being persistent can either get you a restraining order or get you lunch with someone. (Laughs) That was the case with John Stamos.

AL: John Stamos has a restraining order against you or you guys are going to lunch?
MB: Well I want to put on record that Beebs and Her Money Makers have beef with John Stamos. He promised to have lunch with the band and then totally bailed on us. I’m not saying that my feelings are hurt but he certainly disappointed me.

AL: This album has similar artwork to your previous releases. Can you tell us a little bit about that?
MB: We have had the same guy doing our art work since the very first album. His name is Tony Baldini and he is just amazing. He actually did a full comic book on as and we are currently working on a second one which should be out next year.

AL: Can you tell us how you first got involved with performing on the Warped Tour?
MB: It was like magic! We were playing the Florida Music Festival which was being held in downtown Orlando and Kevin Lyman was a keynote for the festival. He saw our performance and came up to me afterwards and introduced himself. He said he thought we were amazing and asked if we would come out on Warped Tour the following year. I still to this day don’t know if that was even real.

AL: How did being involved with the television show come about? 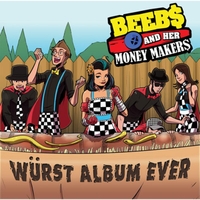 MB: Kevin called me and told me they were going to do a second season of “Warped Roadies” and they were looking to follow two female artists this time around. They were looking at doing one independent artist and one that was on a label. They chose us and Echosmith who are on Warner Brothers.

AL: You and the band had a lot of big moments happen while on the tour. What was it like having the cameras there to capture everything?
MB: It was all just so crazy! Everything you saw was real and I am glad the cameras were there as the summer just happened so fast. So much went on it was hard to retain it all. (Laughs) I met my brother for the first time, my dad came out to the tour, I met a boy, got to sing with Reel Big Fish and ended up becoming good friends with those guys. We actually got to tour with them recently which was awesome! It’s really just hard to believe that all that stuff happened within two months.

AL: Were you surprised with the impact the show has had on the band?
MB: Kevin Lyman has been a huge inspiration to me on a business level. I was already trying to make it to the lecture the day he asked us to be on Warped Tour but I didn’t make it. That day was crazy and then I end up meeting him and being asked to be on the tour. This whole experience has been so surreal and leading up to all this we were working and still are working very hard. I will forever be in debt to Kevin for everything.

AL: Can you tell us about the bands plans for this summer and any other plans you guys might have?
MB: This summer is going to be crazy! We partnered with a company called Flutter Fetti who is the industry’s leading confetti maker. We are going to be playing on the Journey’s stage this year and we have so much cool stuff added to the show that our performances are going to awesome. We are going to have confetti at our merchandise stand for people to throw during our set. We are bringing out the Jam Bot this year and we are also encouraging people to come dressed as their own super hero. It can’t be one that already exists it has to be something they created. We plan to pick the top three or four at each show to come up and dance on stage with us during our set. It’s just going to be a lot of fun.