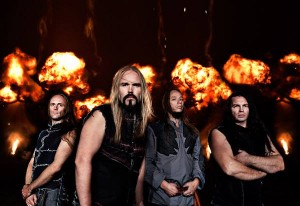 Lauri “Varulven” Ounapuu is the lead vocalist and multi-instrumentalist for the folk heavy metal band Metsatöll.  Formed in 1999 in the Baltic region of Northern Europe Metsatöll has been pummeling audiences with their unique sound which features a blend of traditional Estonia instrumentation and modern day heavy metal. The group just released a brand new album titled “Karjajuht” via Spinefarm Records and Media Mikes had the chance recently to talk with Lauri about the album and the group’s beginnings.

Adam Lawton: Can you tell us a little bit about the bands formation?
Lauri Ounapuu: Markus our singer started this band in 1990. I joined the band after we starting jamming in my apartment one day. I play a number of traditional Estonian instruments and what we were playing sounded really interesting. My neighbors weren’t too happy at the time however as we ended up playing until like four in the morning. We really were having a good time. I did my first show with band in Estonia and afterwards we started working on new material. Back then I played mostly guitar but I am a lousy guitar player and eventually moved to the more traditional instruments. It was also at this time they I mentioned adding more guitar parts to what we had already in order to make things more metal sounding. Our style wasn’t anything we specifically set out to create. Things just sort of evolved and people started to really enjoy what we were doing.

AL: Would you say your background as a musician is more in traditional music than say heavy metal?
LO: As a child I spent a lot of time at my grandparent’s houses. They lived in the tradition style of Estonia. They also listed to traditional Estonian music. When they passed away I was looking for some way to connect so I started learning traditional instrumentation and songs. At the same time my friends were all in to heavy metal so that too played a big part in my life. When your friends are all metal heads you start enjoying it yourself.

AL: Can you tell us about the new album “Karjajuht”?
LO: Every time we start on a new record it seems as though things happen differently than they did on the previous. It might be someone different brings in a melody or lyrics or something along that lines. We take all those ideas and see if those ideas can be played in our style of music. With the new record we did a lot of improvising and arranging while we were in the studio. We started making this album quite quickly as we no sooner finished the demos and it was time to start recording. Usually we don’t make a lot of changes once we are in the studio however this album worked a little differently. Again things went 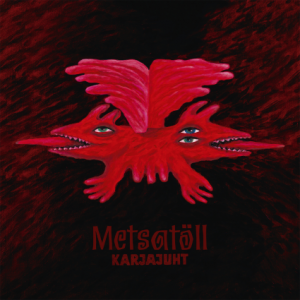 really fast and of course as a musician there is always something you may want to change or try to do better but it just wasn’t possible for us to do that this time around. This was ok though as everything turned out pretty good.

AL: Over the past couple of years we have seen a rise in bands that also incorporate traditional instrumentation and styles. Do you think this is something that we will continue to see more of as more and more people are exposed to the various groups?
LO: There are a lot of bands out there labeling themselves as folk-metal and playing music with traditional elements. The big thing to point out is that they are all very different. Though there are a lot of bands in our genre I don’t think there is really one like MetsatÖll. We are the only band in the world playing Estonian bagpipes. (Laughs)

AL: What are the bands tour plans in support of the release?
LO: We have been doing some gigs around Estonia and we also did a small tour Finland as well. We have been talking about coming to the States in the fall but we are still trying to coordinate all of that.