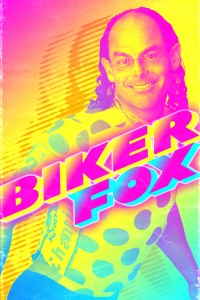 I’ve spent a few weekend evenings in Tulsa, Oklahoma and the one thing that always catches my attention is the muscle-car atmosphere that takes over the city when the sun goes down. No matter where you drive, you can find parking lots full of car enthusiasts and their rides. Horror producer (and Tulsa native) Todd Lincoln and first time director Jeremy Lamberton have teamed up for the documentary “Biker Fox.”

The film tells the story of Frank P. DeLarzelere III, known to the good people of Tulsa as Biker Fox, a misunderstood motivational bicyclist, nature conservationist and muscle car guru. In helping spread the word about their new film, the two took time to answer some questions.

Mike Smith: How did you learn about Biker Fox?
Jeremy Lamberton: My first Biker Fox sighting was at a traffic light. He was on his bike, shaking his ass while staring at people in their cars. I pulled into a Taco Bueno parking lot next to an old bowling alley and he rode up next to my car and asked me if I was married. I told him I was (I wasn’t married at the time) and invited him to perform at Tulsa Overground. That night he told me about all the video he shot of wild life around his house and that I had to see it. Later that week he gave me an entire box of hi-8 and miniDV tapes. I watched everything. There were hundreds of hours of wild turkeys, coyotes, opossums, weed eaters, rabbits, lawn mowers, blue birds, bats and him hand feeding 50 raccoons. There were also tapes of him lecturing directly into the camera about the benefits of fitness and a healthy diet. Biker Fox and I started shooting together the next week.

MS: What made you decide to make a film about him?
JL: The footage he had already shot on his own was magical. He’s such a charismatic guy and it translated so well on video. But I didn’t think about it being a documentary until he started getting arrested. When trouble started swirling it grounded him and he became more genuine to his true character while shooting. And I thought it was funny that Biker Fox was continuing to preach his gospel of good health and happiness while at the same time his life was spinning out of control. He’s an indomitable being.

MS: Did you always intend to do the film as a documentary or did you consider doing a scripted feature film?
JL: “Biker Fox” was always meant to be a documentary. Or some kind of cross-genre film. Most of what happens in the movie you can’t make up. I don’t think his character would have the same impact if scripted. The spontaneity and what happened naturally is what made film special.

MS: Do you think that fans of your horror films will enjoy this film?
Todd Lincoln: Yes. Horror fans will definitely enjoy “Biker Fox.” Anyone who loves the unusual, the macabre, the dark arts and naturally occurring curiosities and oddities…. will appreciate the world of Biker Fox. While this is not at all a horror film in the traditional sense… it certainly could be seen as scarier than most. You will see blood. You will see violence. You will see killer raccoons.

MS: Jeremy, you’ve finally gone behind the camera. Was the experience what you expected?
JL: I’ve been making films for years but this was my toughest challenge. BIker Fox is a raw dog. I wanted the film to tap into Biker Fox’s psyche. Shooting with Biker Fox is like shooting a nature film. You can’t control it. You just hope to be rolling when something memorable happens. And Biker Fox has a tendency to perform in front of a camera. And he’s severely ADHD, so he’s constantly moving. He can’t sit still. The most effective way to show his true character – the character behind the character – was to make the film non-traditionally. So we set up cameras on tripods all over his house and in his shop and encouraged him to videotape himself. I would go to his house multiple times a week and pick up sometimes as many as 40 tapes at a time. He was shooting like crazy. Like video diarrhea.

MS: I’ve been to Tulsa and have observed their “muscle car culture” up close. What is your take on it?
JL: It’s crazy. The real collectors takes it very seriously. A lot of them too seriously. I’ve been to a few swap meets with Biker Fox. One time while looking at a guy’s 1967 GTO I put my hand on the car to look inside and he snapped his fingers and told me to never touch his car again. It doesn’t seem worth it. They spend all their time stressing over door dings and scratches. Seems like wasted energy.

MS: What do you have coming up?
JL: I’m working on a narrative script and producing a documentary called “Dreamland.” Also, Tulsa Overground make its return this August after a 7 year hiatus.