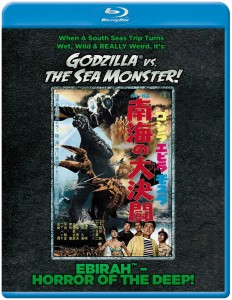 Ebirah, Horror of the Deep (1966)” Official Premise: When Ryota’s brother Yata disappears at sea, the intrepid youth and his friends join forces with a slightly trustworthy bank robber, 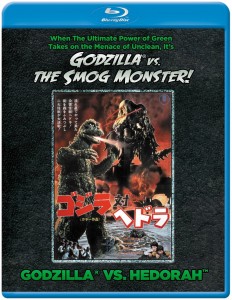 steal a boat and go after him! Of course, there’s the little problem that Yata may be lost on a mysterious island where the evil terrorist organization Red Bamboo has enslaved natives to make heavy water for nefarious purposes. And that means dealing with the island’s monstrous, 164 feet tall guardian Ebirah, as well as Red Bamboo’s arsenal of super advanced weaponry. On the plus side, help may be at hand in the form of a nubile island girl, two tiny fairies, their giant protector Mothra and the big G himself, the mighty Godzilla. Surviving the results of all that “assistance” may not be guaranteed, but Red Bamboo will never want to tangle with teenagers AND Godzilla at the same time again!

“Godzilla Vs. Gigan (1972)” Official Premise: When alien invaders, plans for a children’s theme park and four giant monsters with six heads between them all collide, the result is the inevitable battle for the fate of the Earth. At least, that’s how it is for Godzilla, who teams up with his former spiky foe Anguirus for a tag team match against two of his greatest adversaries: the legendary three headed King Ghidorah and Gigan, the cyborg hench-monster for insidious insect aliens whose plot to wipe out all human life is cleverly disguised as plans for the construction of a new children’s theme park. Unfortunately for the bug’s diabolical designs, their secret monster control codes are accidentally discovered by comic book artist Gengo Kotaka, who broadcasts the master tape and brings Team Godzilla into 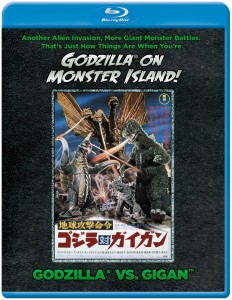 play. It’s not going to be an easy fight, though, as the odds are four heads to two, and King Ghidorah’s one of Godzilla’s toughest opponents. With his cybernetic weaponry Gigan is equally ruthless, and his alien masters are as hard to kill as the cockroaches they resemble. Will Earth’s biggest defenders finally fall? Or will Godzilla, and insecticide, triumph over all?