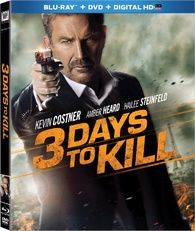 Kevin Costner has been on a hot streak recently with “Hatfields & McCoys” and “Man of Steel” but “3 Days to Kill” cools down his streak quite a bit. The film is produced by Luc Besson but seems to follow the spy-thriller format and doesn’t really deliver anything new. I wouldn’t say this is unwatchable since if you REALLY like Costner you can probably find something that you like about this. I just had trouble making it fully through it. There was a lot of yelling at the screen and eye-rolling happening here. When it comes down to it good action, decent acting, bad story.

Official Premise: Kevin Costner is a dangerous international spy who is determined to give up his high stakes life to finally build a closer relationship with his estranged wife and daughter, whom he’s previously kept at arm’s length to keep out of danger. But first, he must complete one last mission- even if it means juggling the two toughest assignments yet: hunting down the world’s most ruthless terrorist and looking after his teenage daughter for the first time in ten years, while his wife is out of town.

20th Century Fox has delivered this film as a Blu-ray + DVD + UltraViolet Digital Copy. There is a bonus extended cut included as a Blu-ray exclusive, which runs five minutes longer than the theatrical cut. Nothing ground breaking included in the new cut but still worth checking out over the theatrical. The 1080p transfer presented with an 2.37:1 aspect ratio looks very sharp and worked well with the gorgeous setting of Paris. The DTS-HD Master Audio 5.1 is also quite impressive especially with the big action sequences.

In terms of special features, there is not a ton of extras included here. “The Making of 3 Days to Kill” is just under 10 minutes long and is the basic behind-the-scenes look into the production. “McG’s Method” is a short profile on the director. “Covert Operation” is a cool feature featuring a real life former CIA agent talking about his work. Lastly there are some theatrical and extended trailers included.