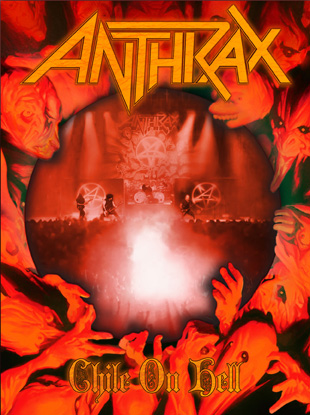 LOS ANGELES, CA – Wednesday, May 28, 2014 – Get ready to mosh in the privacy of your own home, because multiple Grammy-nominated, Platinum-selling thrash masters ANTHRAX have announced the release of “Chile On Hell,” a live-in-concert DVD that is set for a September 16, 2014 release. “Chile On Hell” was filmed at the Teatro Caupolican in Santiago, Chile on May 10, 2013, and features Anthrax – Joey Belladonna/vocals, Scott Ian/guitar, Charlie Benante/drums, Frank Bello/bass and Jon Donais/lead guitar. The band performed an extended set that featured songs from Anthrax’s entire catalogue – all the fan-favorites including “I Am The Law,” “Indians,” “Madhouse,” “Caught In A Mosh,” “The Devil You Know,” and “I’m Alive.” “Chile On Hell” will be available on DVD and Blu-Ray, was recorded in 5.1 Surround Sound, and will retail for $16.98.

“Santiago was the perfect place to film the show for this,” said Anthrax’s Charlie Benante. “When we’d played there in the past, we’d finish our set, play our encore and go back to the dressing room. But every time, the fans would continue to scream and cheer and clap. I mean, they went on and on, they wouldn’t stop. One time Scott and I walked out to the side of the stage just to watch what was going on in the audience, it was intense. Why wouldn’t we want to film a DVD in front of an audience like that?

“Plus,” Benante continued, the time was right to do this DVD.” The band was in the home stretch of a three-plus-year campaign to record and support Worship Music and the Anthems EP, a period of time that was loaded with high points: the return of “classic era” vocalist Joey Belladonna, Worship Music making the band’s highest chart debut in two decades, the series of Big Four shows – Anthrax, Metallica, Slayer and Metallica, the four bands that wrote the speed and thrash metal road map – that culminated in the September 2011 Big Four spectacular at Yankee Stadium in the band’s home town of New York, “Anthrax Day” declared in the Bronx, becoming the first metal band to have its music (“Got The Time”) played on Mars, two Grammy nominations, and sold out shows in every corner of the globe. “We wanted to finish on a high note,” Benante continued, “we didn’t want to look back and regret that we didn’t record the live show.”

“Chile On Hell” was produced by Jay Ruston and filmed by City Drive Entertainment Group and DC3 Global. The DVD’s cover art was designed by Stephen Thompson who partnered with Benante to “redesign” the artwork from last year’s Anthems EP.