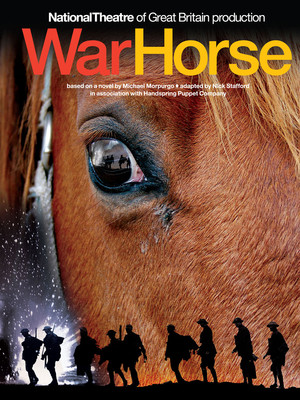 It was an incredible evening in Kansas City this week when the Tony Award winning play “War Horse” rode triumphantly into the Music Hall for a one week engagement.

Based on the popular children’s book of the same name by Michael Morpurgo (adapted for the stage by Nick Stafford, the play was also the basis for the very successful Steven Spielberg-helmed film from 2011.

The play begins in August 1912 in England. A horse auction is about to commence. In a bidding war between the Narracott brothers – well-to-do Arthur (Andrew Long) and down-on-his-luck Ted (Gene Gillette). As the two go at it, they drive the price to more than three times the usual. Ted wins but he must spend the mortgage money on the creature. What’s worse, while Ted was looking for a plow horse, he has come home with a hunter. He entrusts the care of the horse to his son, Albert (Michael Wyatt Cox). Albert names the horse “Joey,” and with love and kindness, the two bond. Soon, young Joey is a majestic steed…rearing up in joy when Albert is near. It is a bond that will continue to hold, even when separated by war.

Winner of 5 Tony Awards (and a special Tony for it’s remarkable puppetry), including Best Play, “War Horse” is a show that you will remember forever. Not only for its great cast and outstanding set design, but for the amazing work of the South African Handspring Puppet Company. What they have created is nothing short of miraculous. Life size horses gallop and play on the stage, guided not only by the puppeteers inside the creation but the one guiding the head as well, capturing the very essence of movement and grace. With the “handlers” dressed as others in the cast, they blend in so nicely that one can easily begin to believe the horses are real.

As the story progresses over six year, Joey learns to do things he wasn’t intended to and uses those skills to not only help himself but to save the lives of those around him. He is truly the star of this production and I can’t tip my hat enough to the artists that bring him, and the other horses, to life. The human actors also do a great job. As Albert, Cox displays just the right amount of wide-eyed innocence that is slowly lost as he goes off to battle in an effort to search for his friend. Both Long and Gillette portray the conflict between the two Narracott brothers sharply. Yes, there is some anger and animosity there, but underneath there is love. Others who deserve special notice include Maria Elena Ramirez as Albert’s mother, Andrew May as a German officer who soon understands the horror of war and Caden Douglas as the hard charging Captain Stewart. And I would be remiss if I didn’t mention the cast that brings Joey to life: Jon Hoche, Brian Robert Burns and Jessica Krueger. Bravo!