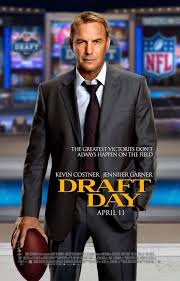 In 1994 the film “Major League II” had the hapless Cleveland Indians heading to the World Series. Sadly, because of a labor dispute the real World Series was cancelled that season. However, in 1995 the real Indians did, in fact play in the World Series.

It’s 2014, and the NFL player draft is about to begin. Holding the seventh pick in the draft is Cleveland Brown general manager Sonny Weaver, Jr. (Costner) Sonny’s first two years at the helm have not been the best, both for the Browns and him personally. Injuries hurt the club, causing losses to pile up. It got so bad that Sonny made a tough decision and fired the team’s beloved coach, who also happened to be Sonny’s father. Coach Weaver passed away during the off season and now Sonny must not only grieve for the man who taught him everything he knows about football but he must keep the Cleveland faithful happy

An incredible inside look into how NFL teams wheel and deal, “Draft Day” is an excellent film for anyone that ever rooted for the home team. It is a little “football nerd” centric so if you’re not a draft junkie or only have a passing interest in your team you may find it a little boring.

With the draft 12 hours away we find Sonny making phone calls. Should he take the defensive player he’s been scouting for years? The running back that’s the son of a former Brown. Or should he trade away the future by grabbing the number one pick from the Seahawks by offering future first round picks? It’s not an easy decision to make. Especially when the local fans are already calling for your head on the call in radio shows. Left with nothing to lose, by the end of the day Sonny will have considered all of the above.

Told with humor, and with the obvious support of the NFL, “Draft Day” is just the film to see before the real draft starts on May 8. Costner leads a great cast of characters, all with their own personalities. Denis Leary is the newly hired coach, intent on keeping the team’s quarterback. Garner is the team’s number cruncher, as well as Costner’s behind the scenes girlfriend. She started the day with an announcement of her own so to say Sonny is stressed out is an understatement. As the countdown to pick number one comes to a head the wheeling and dealing go into overdrive!

What’s funny about the film is that they present it as right before this year’s draft, with the Seahawks picking first. Ironically, the Seahawks won the Super Bowl last year so they’ll actually pick last! Which is why I mentioned “Major League II.” Who knows, maybe movie magic will return to the Forest City and we’ll see the Browns next February in Arizona. But I wouldn’t bet on it!