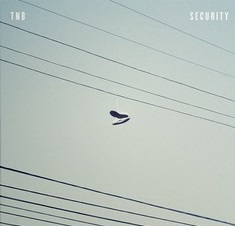 Last summer, I caught a concert with Thomas Ian Nicholas here in Orlando, FL and being a fan of his earlier four albums, I remember hearing a few amazing new songs that were not yet released. During the show, Thom discussed exploring a more “indie rock” sound with these new songs and I have to admit, they are probably some of his best songs. Along with Thom on this album are three of the original members of The Graduate including Matt Kennedy, Tim Moore & Jared Wuestenberg. I hope Thom continues to explore this genre because these songs are absolutely amazing.

These songs were written by Thom and Caleb Turman (from the band TEAM*) and produced by Thom and Matt (from The Graduate). There are four tracks on this EP and each song is better than the one before it. “Security” is one hell of a catchy, powerful and all around fun as hell song. I can see this being a huge hit on the radio! I challenge you to listen to this song and not have it stuck in your head for days (especially the chorus). “Don’t Stop” has this real indie feel and features some great guitar work. Having heard these songs a few times live, they are quite different (but not in a bad way at all).

“Terrified” is my wife’s favorite track. This was the song that stuck out the most when we heard it live last summer. This track sounds the most different live than the produced studio version, in my opinion. I personally prefer it live but I still really dig this song since it is jam packed with energy. The last track “It’s Over” is a track that has really grown on me since first hearing it. After listening to it a few times, I love the constant beat behind it and the overall tone of the track. My main issue with this EP overall is the fact that it is an EP, I want more songs and I can’t wait to see what Thom and his band comes up with next.

“SECURITY EP” is now available on iTunes (for ONLY $3.96)
You can also order a CD directly from the band’s webstore.