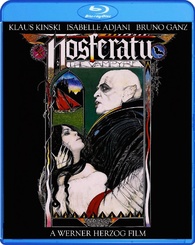 “Nosferatu (1922)” is no question one of the first and still one of the best horror films to date. Werner Herzog’s 1979 remake “Nosferatu the Vampyre” is a great film to side-by-side with the original. Klaus Kinski captured the character perfectly and gave me nightmares growing up. This is the first time that this film is being released on Blu-ray in the U.S., thanks to the always amazing Scream Factory and includes both the German and English language cuts of the film. Of course fans know the German is the best but it is nice to have the option for both. A must have for any horror fan.

Synopsis: It is 1850 in the beautiful, perfectly-kept town of Wismar. Jonathan Harker is about to leave on a long journey over the Carpathian Mountains to finalize real estate arrangements with a wealthy nobleman. His wife, Lucy begs him not to go and is troubled by a strong premonition of danger. Despite her warnings, Jonathan arrives four weeks later at a large, gloomy castle. Out of the mist appears a pale, wraith-like figure with a shaven head and deep-sunken eyes who identifies himself as Count Dracula. The events that transpire slowly convince Harker that he is in the presence of a vampyre. What he doesn’t know is the magnitude of danger he, his wife and his town are about to experience.

Even though this is the U.S. debut on Blu-ray,  this has been released before in Germany. It came with pretty impressive German DTS-HD Master Audio 5.1 track but here we only get a DTS-HD Master Audio Stereo track. It still works for the most part but you can just feel the missing potential. Same goes with the 1080p transfer, which is decent but not really stunning, as I would have expected. It is framed in an aspect ratio of 1.78:1. Like all Scream Factory releases, there is also a reversible cover with the classic white theatrical poster design as well.

In terms of special features, I felt kind of let down again especially compared to the German Blu-ray. We are missing Erwin Keusch and Christian Weisenborn’s documentary film “I Am My Films – A Portrait of Werner Herzog (1979)” and the soundtrack featurette. What we do get left over are two audio commentary tracks with writer/producer/director Werner Herzog and also a German language with English subs track again with Werner Herzog, moderated by Laurens Straub. I did enjoy the vintage featurette, “The Making of Nosferatu”. Lastly there are also Theatrical Trailers included.