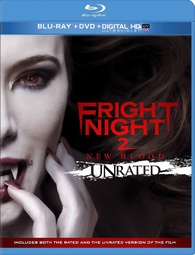 What a waste of time! “Fright Night 2: New Blood” is billed as a direct-to-video sequel to the 2011 remake, yet it is just another remake. I do not understand why they decided to take this route. Of course none of the original cast is back for this mess of a film. Charley, Amy and Evil Ed are placed in a high school program in Romania. Instead of Jerry Dandridge, we get Gerri Dandridge, who is not hard on the eyes I might add, as their female professor. Lastly Peter Vincent is also here except he a reality Ghost Hunters-wanna be paranormal investigator. There is no explanation or reference back to the other film, unless you know from reading this, I was left with a confused face on the entire movie.  Did I mention this is a waste of time?

Official Premise: By day Gerri Dandridge is a sexy professor, but by night she transforms into a real-life vampire with an unquenchable thirst for human blood. So when a group of high school students travel abroad to study in Romania, they find themselves ensnared in Gerri’s chilling web of lust and terror. Charley and “Evil” Ed must stop Gerri from drinking and bathing in the blood of a “new moon virgin,” which just so happens to be Charley’s ex-girlfriend, Amy. They enlist help from Peter Vincent, the vampire hunting host of a reality show called “Fright Night,” to drive a stake through Gerri’s plan and save Amy from a fate far worse than death.

20th Century Fox still delivered a nice release for this terrible film as a Blu-ray + DVD + Digital HD Ultraviolet combo pack. The film is also delivered unrated but since it was never released, it is just another way to draw in any type of audience. The special features are just as weak as the film is.  There is an audio commentary by director Eduardo Rodriguez and producers Alison Rosenzweig and Michael Gaeta, Besides that there is “Fright Night” Webisodes and “Dracula Revealed” featurette included. Don’t waste your time, waste the 2011 remake instead or of course the original 1985 Tom Holland classic, which is the best. Stop making useless remakes!