Probably best known as David, one of the rival “Warblers” on the popular television series “Glee,” Titus Makin, Jr. can now be seen on the popular new CW show “Star-Crossed.”  As Lukas, Makin gets the chance to help save the day with the occasional blast of humor.  While getting ready to take a break from filming and finish his new musical EP, Makin took the time to talk to me about his new show, “The Lion King” and a possible return to “Glee:”

Mike Smith:  Can you give the readers a brief introduction to your character, Lukas, in your new show “Star-Crossed?”
Titus Makin, Jr:  Sure.  Lukas Parnell is one of Emery’s  (Aimee Teegarden) best friends.  He’s the guy that shows her the ropes in her new high school.  He breaks down who people are, what they do and how it all works.  He’s also the “logical” guy…the tech savvy guy.  He’s the guy to go to if you need answers or need to know how to get into dangerous places.   (much brighter) And he’s also the comic relief!  He can cushion the blow of an otherwise dramatic situation.

MS:  What attracted you to the project?
TMJ:  The sci-fi aspect definitely attracted me to the project.  I’m a big sci-fi buff so as soon as I saw the word “spacecraft” I just said “sign me up!”  (laughs)  I also love the comedic aspect within the drama.  I love drama and sci-fi so to be able to play a comedic role within that?  What a dream come true.  I definitely was on board.

MS:  You really do a little bit of everything.  You act, you sing, you dance.  Do you have a preference among your talents?  Is there a dream project out there?
TMJ:  I really don’t have a preference.  I’m very content with both acting and music.  A dream project would probably be….you know, “Glee” pretty much touched everything that I love to do so in a way I’ve already done the musical dream project.  As far as the acting side goes, it’s probably to be able to do a film with Will Smith.  Of course, that’s probably everybody’s dream!  (laughs)

MS:  I know one of your fellow “Warblers,” Darren Criss has appeared on Broadway (Criss took a break from “Glee” to star in the musical “How to Succeed in Business Without Really Trying”).  And desires to tread the boards?
TMJ:  Oh yeah.  I would love to be able to appear on Broadway one day.  I love the stage.  I love theater 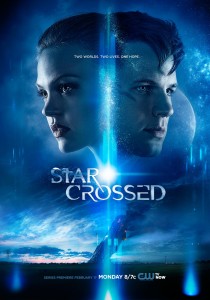 acting and I love musical theater.  That would be an honor.  I’ve thought about that before, but when I did that dream seemed so farfetched that I didn’t consider it for a while.  But now I think it would be amazing to one day jump into a great role.  I need to get a little older so I can jump into a good role in “The Lion King.”

MS:  As “Glee” prepares for its final season next year, do you know if there are any plans to have “the Warblers” return?
TMJ:  I definitely think so.  I haven’t heard much since I’ve been filming “Star-Crossed,” but I do keep in contact with a lot of the other guys and there is always hearsay about us coming back for a “competition” episode or some kind of dramatic moment.  Of course they never get confirmed.  But that’s the great thing about Ryan (Murphy, the creator of “Glee”).  He’s always willing to bring back fan favorites so I think there is a huge chance “the Warblers” will be back.

MS:  What else do you have coming up?
TMJ:  Other than waiting for “Star-Crossed” to air I’m going to dive back into music for awhile while we’re on our break.  I’ll be recording an EP down the road here so for me music is still doing well.