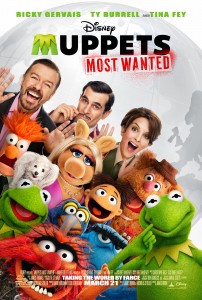 Three years ago Jason Segel helped resurrect the Muppets. With a genuine love for the characters, Segel made a franchise that had seemingly lost its steam over a decade before seem new and exciting again. While still entertaining, the newest film, “Muppets Most Wanted” could use a little of Segels wit and enthusiasm.

The film picks up at the end of 2011’s “The Muppets,” with the gang wondering what to do now that they’ve “gotten the band back together.” Before they can reason things out, they are approached by a promoter (Gervais) and persuaded to embark on a world tour. Wanting to keep things low key, the group leader, Kermit the Frog, encourages taking things slow. Instead they are booked into the grandest theatres in Europe, unaware that their performances are being used to mask a series of crimes. When Kermit is mistaken for Constantine, the world’s most dangerous frog, who has just escaped from a Russian gulag, he is imprisoned while Constantine takes over the troupe. Occasional hijinx ensue.

Lacking a lot of the eternal fun that made the Muppets stars four decades ago, “Muppets Most Wanted” is a by the book sequel which occasionally rises to funny thanks to its humorous human co-stars. As someone that grew up with the band of puppets, from “Sesame Street” to their own show to their early films, what is missing to me is the fun and enthusiasm that I always heard in the vocal performers. Sadly, Jim Henson, Jerry Nelson and Richard Hunt are no longer with us. And while the various performers voicing their characters do their best to sound like fans remember, to my ears they don’t have the same passion as the creators of the characters did.

The songs (and there are many – and not enough good ones) seem to be filler…as if the filmmakers thought that bright puppets and musical numbers would distract the audience from the fact that this is strictly a one-plot film. The saving grace here aren’t the title characters but the human guest stars. If you’ve ever wanted to see Ray Liotta perform the opening number to “A Chorus Line,” backed up by such well-known musical talents as Danny Trejo and Jermaine Clement, then you’re in luck. Tina Fey has fun as one of the Gulag guards who enlists Kermit in planning the annual talent show. Gervais and Burrell have fun as the masterminds behind the various heists the Muppets unwittingly help complete. If only the voices behind the Muppets had as much fun, this could have been a really fun film. Paging Jason Segel.