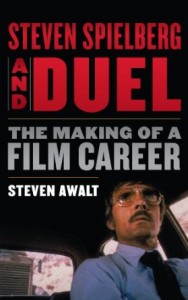 On November 22, 1963, while playing golf with a friend, author Richard Matheson learned of the assassination of President John F. Kennedy. Upset by the news, the duo quit playing and headed home. As they began driving through a narrow pass they heard the sound of a large truck coming up behind them at great speed. The truck continued to bear down on them as they accelerated. No matter how fast they went, the truck seemed to be coming faster. After several terrifying minutes the road finally widened and they pulled over as the truck hurtled down the road past them. Sounds like the makings of a great story, doesn’t it?

“Steven Spielberg and ‘Duel’: The Making of a Career” IS that great story. It’s an in-depth look into the workings of a young 24 year old director who went on to become, arguably, the most successful filmmaker of all time. The book details Spielberg’s early days, from his Super 8 home movies (at age 17 he created a two hour and twenty minute science fiction film entitled “Firelight” that he “premiered” at a local theatre) through his college days at CSU Long Beach and his initial work as a contract director for Universal, where he began hi s professional career directing such television programs as “Night Gallery” and “Columbo.” Impressed with his work the studio gives Spielberg a chance to direct a film to be featured as a “Movie of the Weekend,” based on a short story by Richard Matheson that recently appeared in “Playboy” magazine. The name of the story: “Duel.”

Author Steven Awalt is no stranger to the career of Steven Spielberg, having created and run the extremely popular web site SpielbergFilms.com . It is through this web site that Awalt shared his admiration for all things Spielberg. Here he takes that admiration and shares it with the reader. In an incredibly precise step by step process he guides the reader through the process of making a major motion picture (buoyed by its success and critical acclaim, Universal later released “Duel” in theatres both in the states and internationally). Thanks to recent, in depth interviews with many people involved in the production, including Matheson, Universal executive Sid Sheinberg, composer Billy Goldenberg and, most importantly, Spielberg himself, the book puts you on the set and involves you in almost every aspect of the production. It is because of this attention to detail that Awalt has created one of the best “making of” books in recent years.