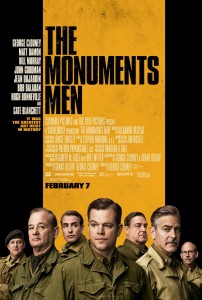 In a review written about George Clooney’s directorial debut, “Confessions of a Dangerous Mind,” the critic noted that Clooney’s work behind the camera signaled the introduction of a major filmmaking talent. Nine Academy Award nominations and two Oscar wins later, that critic proved to be right. And though I don’t like blowing my own horn I should point out here that the critic was me. A decade later, Clooney continues to impress me with his latest film, the World War II drama “Monuments Men.”

Ghent, Belgium. Despite the protests of the protective clergy, a group of Nazis is in the process of stealing the historically valuable Ghent Altarpiece. Twelve painted panels with a value to Christians that can’t be measured in money. Unfortunately, all over Europe, wherever the Nazis have gained a foothold, this story is repeated thousands and thousands of times. From large galleries to the collections from the private sector, Hitler has decreed that any and all valuable art be confiscated. His plan is to open a museum in his hometown where he can display these items. Enter Frank Stokes (Clooney), an art historian who has pressured President Roosevelt into allowing him to form a band of likeminded men in the hopes of saving history. “We need to know if the Statue of David is still standing…if the Mona Lisa is still smiling.”

Based on a true story, “The Monuments Men” tells the story of Stokes’ team and the missions they underwent to ensure that past civilizations, long gone but still remembered because of their artifacts, would not be destroyed. Though the team is made up of fellow art historians and curators, they first must endure military basic training because they must travel as part of the military. The group includes James Granger (Damon), curator of the Metropolitan Museum of Art in New York, his English counterpart, Donald Jeffries (Hugh Bonneville) and French historian Jean Claude Clermont (“The Artist” Oscar winner Jean Dujardin). They are joined by three American scholars, played by John Goodman, Bob Balaban and Bill Murray. The three provide some comic relief but also some of the film’s most dramatic scenes. All are perfectly cast as is Cate Blanchett, who plays a French art curator who stands accused of helping the Nazi’s steal that country’s artifacts. As the war begins to wind down the men learn that the Russian army, in an attempt to recoup some of its monetary losses, is also looking for the stolen art with the intentions of keeping it.

Credit Clooney, the director for surrounding Clooney, the actor, with a top rate cast. Each actor is a perfect complement to the others, with no one overshadowing the other. Damon is solid, as are the rest of the actors. If I had to single out a group it would be the three scholars. All have done incredible supporting work in the past and they continue that trait here. They know why they’ve been chosen and they know what is at stake. All three bring a touch of realism to the moments depicted, with Murray making himself an early name to consider for next year’s Oscars. Technically the film is well made, with great affection and attention to detail while composer Alexandre Desplat’s score sets the perfect mood.