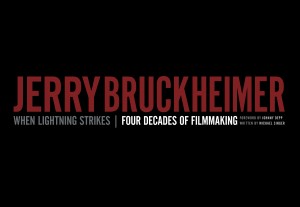 When you think about Jerry Bruckheimer, you think BIG and then BIGGER! If you do they this book shouldn’t be surprising since it is HUGE. Love him or hate him, Bruckheimer has quite the resume and a very long list of box office blockbusters under his name. Here are a few of them including “Top Gun”, “Days of Thunder”, “Beverly Hills Cop”, “Bad Boys”, “Crimson Tide”, “The Rock” …(deep breath)…”Con Air”, “Armageddon”, “Gone in Sixty Seconds”, “Pearl Harbor”, “Black Hawk Down”, “Pirates of the Caribbean” series and “National Treasure” series. Besides films, he also has his hand in TV with the following series including “CSI” franchise, “The Amazing Race”, “Cold Case”, and “Without a Trace”. So if you are a fan of Bruckheimer, then I cannot recommend this book enough since it is really the ultimate ode to an amazing filmmaker…just make sure you have enough room on your bookshelf.

“Jerry Bruckheimer: When Lightning Strikes – Four Decades of Filmmaking” really gives deep to his start in the early 70’s with “The Culpepper Cattle Co.” all the way to the most recent “The Lone Ranger” from last summer. There are some very great behind-the-scenes information provided for these projects. The author, Michael Singer, is a writer and production unit publicist that has been in the business for over 35 years. He has worked beside Bruckheimer on his films whether it was in the deserts, on a tropical islands and many other filming locations. So Singer really is the best person for the job and to have an great insight into Bruckheimer’s body of work. Also previous books he has released include “The Art of Pirates of the Caribbean: On Stranger Tides”.

Besides the writing, let’s get to the real good stuff, which would be the images. They are extremely high quality images from these films. In case you forgot that I said this book was HUGE, so expect that these images have big pages to fill. My only concern with this book was due to its size, the biding seems a little wobbly and weak. I think they should have make the structure a little more hardcover and this would have been perfect. Also included is a great foreword from Johnny Depp, who worked with Bruckheimer on numerous projects over the year. There is an exclusive interview with Bruckheimer’s wife, Linda. There is also (and this made me laugh) an introduction from Bruckheimer himself. I loved the fact that he gave his own intro. Jerry Bruckheimer is a legend and his work is very well-respected and will continue to be. Whenever you see a Jerry Bruckheimer film, you know it is going to be fun and quite a ride and that is what you get when you open this fantastic comprehensive guide to his still going strong career.