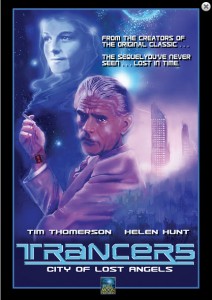 If you are a fan of Full Moon, then you know about the lost original sequel to the classic series “Trancers”. Trancers: City of Lost Angels” was post of an unreleased anthology film that Charles Band directed back in 1988 called “Pulse Pounders”. It consisted of three short films, the first was the “Trancers” sequel, the next was “H.P. Lovecraft’s The Evil Clergyman” and the last was a sequel to “The Dungeonmaster”. For the last 25 years, these were though to be lost…until now.  “Trancers: City of Lost Angels” otherwise known as “Trancers 1.5” sees the return of Tim Thomerosn, Helen Hunt and the rest of the “Trancers” cast. A must have for any Full Moon fan!

In 2011, a once thought lost workprint of “Pulse Pounders” was found and the first segment “The Evil Clergyman” was digitally restored. It received such praise from fans that Full Moon decided to move forward on the digital restore of “Trancers”. According to the DVD disclaimer, it was a painstaking process that took over a year to bring this basically stock footage into a film and augmenting the soundtrack with music from the classic first “Trancers” film. So if it wasn’t for the fans, this would have never seen the light of day.

Official Premise: Jack Deth, the super cop from the future, has put away three centuries worth of time traveling criminals. But Deth’s most dangerous collar, the ultraviolent assassin Edlin Shock, has escaped from her maximum security holding cell and won’t rest until she’s exacted revenge. Meanwhile, Deth is trying to make a life for himself as a private eye in 1988 Los Angeles with his hot-blooded girlfriend Lena (played by Academy Award winning actress Helen Hunt). Relationship troubles are just the beginning of Deth’s problems when he learns that Edlin Shock has followed him back in time. Aided by his former police chief McNulty, whose consciousness is inhabiting the body of a 13-year-old girl, Jack Deth will have to use his wits, as well as his fists, to save the past, present, and future!

The lost sequel might only be 30 minutes long but following it there are some decent special features included. There is a Tim Thomerson Intro Video. There is “Flashback Weekend Premiere Documentary”.There is a “Pulse Pounders Show West Promo” included. Lastly there is an un-restored 60-second preview of “The Dungeonmaster” segment. This segment is also planned to be released on Full Moon’s streaming channel online and in fact all three segments will be shown there together as the original “Pulse Pounders” anthology. Leave it to Full Moon to deliver the best for their fans. If you are not a subscriber to Full Moon’s streaming channel, I would highly recommend it!