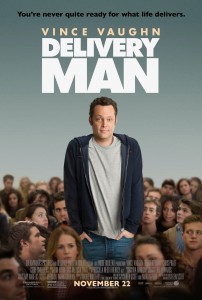 Meet David Wozniak (Vaughn). A good guy with bad luck. He currently owes $80,000 to a local “lender” and is constantly looking over his shoulder. Imagine his fear when he comes home one evening to find a man in his apartment. But the man is no leg breaker. He’s a lawyer. And he’s got some interesting news for David.

Based on a true story that occurred in England, “Delivery Man” is a sweet and touching tale about a man who, two decades earlier, donated sperm to raise some money. 623 times! For reasons not fully explained, David learns that he has fathered an amazing 533 children and that 142 have filed paperwork in court to learn his identity. He turns to his friend Brett (Pratt), who informs him that, even though he and the parents who received his sperm signed confidentiality agreements, he may have to reveal himself. Of course, once word of the lawsuit hits the airwaves, it’s only a matter of time before the cat is out of the bag.

If you’re a fan of Vince Vaughn’s (count me in), you may be quite surprised at “Delivery Man.” This is not the wise-ass Vaughn we’re used to, but instead a fully developed and fleshed out character. As the court date approaches, David innocently begins to investigate a packet he’s given with current profiles of the 142 children. He draws out one and learns that he’s the father of a current New York Knick. As this goes on and he continues to learn about the kids in question he begins discreetly searching them out and observing their lives. These are the best parts of the film, when David finds ways to interact with them individually. He learns that a family is what you make it, even if you make it 533 times. Vaughn invests some real emotion in his performance. He also gets extra credit for wearing an “Amity Island Welcomes You” t-shirt! Pratt is funny as the lawyer who defends David’s privacy rights as is Smulders, an on-again/off-again love of David’s with her own news to tell.