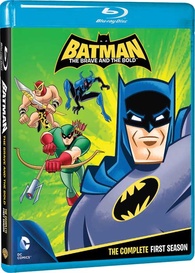 “Batman: The Brave and the Bold” is not the best animation series for the caped crusader, the title is still held by “Batman: The Animated Series”, but it is still a whole lot of fun! The show has a great balance of humor topped with some awesome action. Diedrich Bader takes on the voice of Batman and does a great job. The show focused on Batman teaming up with various heroes some DC Comics’ favorites and other some cool but obscure names including Aquaman, Blue Beetle, Plastic Man, Green Lantern, Kamandi, Doctor Fate, Jonah Hex, Black Canary, Green Arrow, Mister Miracle and The Atom. The show ran for three seasons considering of 65 episodes total. Here’s hoping that season’s 2 and 3 are not to far behind.

The 26 episodes included for this season are: “The Rise of the Blue Beetle”, “Terror on Dinosaur Island”, “Evil Under the Sea”, “Day of the Dark Knight”, “Invasion of the Secret Santas”, “Enter the Outsiders”, “Dawn of the Deadman”, “The Fall of the Blue Beetle”, “Journey to the Center of the Bat”, “The Eye of Despero”, “Return of the Fearsome Fangs”, “Deep Cover For Batman (Part 1)”, “Game Over for Owlman! (Part 2)”, “Mystery In Space”, “Trail of the Demon”, “Night of the Huntress”, “Menace of the Conquering Caveman”, “The Color of Revenge”, “Legend of the Dark Mite”, “Hail the Tornado Tyrant”, “Duel of the Double Crossers”, “The Last Bat on Earth”, “When OMAC Attacks”, “The Fate of Equinox”, “Mayhem of the Music Meister”, “Inside The Outsiders”

This show was previously been released on DVD in various individual volumes but never as a complete series. Warner Archive Collection is giving this show a very impressive Blu-ray release. This is a show that probably would have never seen a Blu-ray release if it wasn’t for them. The animation is crisp within its 1080p transfer and the DTS HD-Master Audio 2.0 track is rocking with the action and humor. This release is exclusive to the WBShop currently until Dec 05, 2013. There are no additional special features included on this set, which is not a surprise since none of the previously released volumes DVD for this show had any extras either.