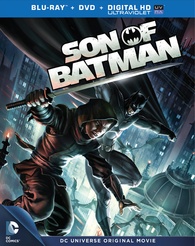 The DC Universe has really been kicking ass recently with their recent films include “Justice League: War”. “Son of Batman” is based on Grant Morrison’s “Batman & Son” arc and in fact has a shared continuity with “War”. So that only makes this film cooler being DC is stepping up their game as this one is one of the recent best animated films in that universe. Along with Batman and his son there are also other classic characters stocked up including Ra’s al Ghul, Nightwing and Deathstroke. So fans should be excited about this! Next up we have “Batman: Assault on Arkham”, based on the popular “Arkham Asylum” videogame series, later this year. DC Universe is getting steam here with these animated films, the live-action “Batman Vs. Superman” and the recently announced “Justice League” movie as well. Watch out Marvel!

Official Premise: Hidden atop a secret mountain stronghold lies the League of Shadows and its fearless leader, Ra’s al Ghul. Together with his equally dangerous daughter Talia, he oversees a trained army of assassins with plans for global domination. But an uprising from within the league now threatens to shift the balance of power and sends Talia and her young son, Damian, fleeing to Gotham City. With assassins on their trail, Talia seeks the protection of Batman, who, unbeknownst to him, is the boy’s father. With his son in tow, Batman wages war against the villain Deathstroke and the League of Shadows, all while teaching his headstrong boy that one can’t fight crime by becoming a criminal. With help from Gotham’s finest, including Commissioner Gordon and Nightwing, Batman will soon discover that his son and most trusted ally are one and the same!

There is no shortage of talent actors in this film either Jason O’Mara returns from his role as Batman in “Justice League: War” and his son Damian is played by Stuart Allan (TV’s “Bad Teacher”). There is a mini “Firefly” reunion with Sean Maher voicing Nightwing/Dick Grayson and Morena Baccarin voicing as Talia. Also included are Thomas Gibson (“Criminal Minds”) as Deathstroke, Xander Berkeley (“Being Human”) as Langstrom, David McCallum (“The Man from U.N.C.L.E”) as Alfred, Giancarlo Esposito (“Breaking Bad”) as Ra’s Al Ghul, and Bruce Thomas (Kyle XY) as Gordon. So some great talent rounds out this film.

Warner Bros is releasing this film as a combo pack including a Blu-ray + DVD + UltraViolet Digital Copy. “Son of Batman” looks solid within its 1080p presentation. The animation is crisp and even though dark in parks really stands out. The DTS-HD Master Audio 5.1 surround track works perfectly with the film’s action and witty dialogue. There are some great special features as well including three featurettes “Strange Blood Ties”, “Damian Wayne, The Fang, and the Demon Head: The League of Assassins” and “Designing the Characters with Phil Bourassa”. These gives a nice round look at the film. There are two sneak peaks for the next DCU Original Movie “Batman: Assault on Arkham” and the upcoming documentary “Masterpiece: Frank Miller’s The Dark Knight Returns”.

There are also four “From the DC Comics Vault” bonus cartoons including Batman Beyond: “Out of the Past”; Batman: The Brave and the Bold: “The Knights of Tomorrow!”; Batman: The Animated Series: “Showdown” and Batman: The Brave and the Bold: “Sidekicks Assemble!”. These episodes are a great addition to this release. Plus it is always a bonus to get to watch “Batman: The Animated Series” on Blu-ray! Maybe one day Warner Bros will smarten up and just release the whole series already (hint, hint!).