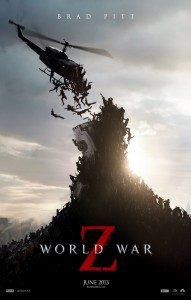 Out on a drive with his family, Gerry Lane (Pitt) suddenly finds himself in gridlocked traffic. For an unknown reason, not a car in Philadelphia is moving. As he gets out to investigate he is greeted by a series of explosions. When the smoke clears the screams begin.

Carried by Pitt’s performance, “World War Z” is a sometimes intense story of the rise of the undead. Having recently retired from his job as a “fixer” for the United Nations, Gerry is recruited by his old boss (Fana Mokoena) to accompany a novice scientist on a journey to hopefully find a cure for what seems to be ailing the flesh eating monsters that now roam the earth freely. The only clue Gerry is given is a cryptic Japanese email, sent a few days before, which included the word “zombie.” Reluctant to leave his family, Gerry is assured that they will be looked after as long as he’s away. If he doesn’t help, he and his family will be removed from their safe zone and left to fend for themselves. Not much of a choice, is it?

It seemed an odd choice to have the director of “Monster’s Ball” and “Finding Neverland” direct a film about the zombie apocalypse. But director Forster also has the Bond film “Quantum of Silence” on his resume so he also knows his way around an action piece. There are some nice jolts mixed in with humor. There is also an amazing sequence set aboard a plane that will have you gripping the armrests. Like the zombies of Zack Snyder’s remake of “Dawn of the Dead,” these are not the plodding creatures we are used to. These zombies strike quickly, often in groups. When they’re not happy they let out a screech that sounds like an angry chicken. The premise is fine. It’s the presentation that falters. Shown in a very unnecessary 3D, the film is actually hurt by the process. Action scenes are too dark and many foreground objects are blurred when the focus is pulled to capture the action being featured.

Based on a novel by Max Brooks (Mel’s son…go figure), the story moves across the world as Gerry and his team attempt to find a way to beat the zombies. Pitt is strong and determined, yet vulnerable when it comes to his wife and daughters. Mireille Enos (“The Killing”) is equally strong in the face of her family’s separation. Supporting turns by Morse, Dale and Pierfrancesco Favino, among others, keep the film interesting. Technically, I must give a shout out to the more than 100 makeup artists that helped create the various zombies.