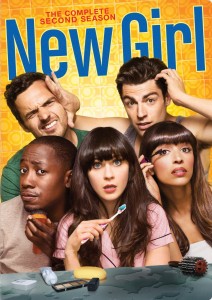 I wondered how they were going to top the first season of “New Girl” but they managed to make this second season even better.  “New Girl” is easily one of the best comedies on television right now.  It is hip, funny, packs a great cast and some amazing writing. There is perfect balance of comedy and drama as well in this season. Zooey Deschanel, Jake Johnson, Max Greenfield,  Lamorne Morris and Hannah Simone are amazing together.  They each work off each other and it works so well. Season three is already off to a great start and I can’t wait to see what they have planned.

Official Premise: The romantic tension between Jess (Emmy Nominee Zooey Deschanel) and Nick (Jake Johnson) escalates in the hilarious, quirky second season of New Girl – but will they ever hook up? Meanwhile, Schmidt fails to be hip, Winston isn’t “prepared” for a hot date, and Nick faces a death in his dysfunctional family. While Jess does her best to replace Cece on a modeling job and a drunk Elvis impersonator at a funeral, Schmidt and Winston hope to rearrange Cece’s arranged marriage.

Season two packed 25 amazing episodes and featured some guest stars like Jamie Lee Curtis, Rob Reiner and Dennis Farina. I loved that Curtis and Reiner played Jess’ parents, they were really cute together and really added a lot to the season.  Farina also delivered a great role as Nick’s dad, who ended up passing away on the show (and also in real life this year). He is a great actor and was a great addition to the show. I also loved David Walton (TV’s short-lived “Perfect Couples”) as Jess’ doctor boyfriend. He was funny and meshed very well with the rest of the cast. This show is just filled with so many great one-liners, I am waiting for someone to start a website with nothing but quotes from this show.

I wish Fox would give this show the Blu-ray treatment but for now we just have DVD. The special features are pretty solid. We do though get he extended version of the very popular episode, “Virgins”, which is one of my favorite from the season. It is only available on this DVD and is a must see for any fan of the show. Besides that there is a commentary track for the episode “Cooler” and “Full of Schmidt”, which is a fun featurette on my favorite character. Lastly there are some great Deleted Scenes and a hilarious Gag Reel included.