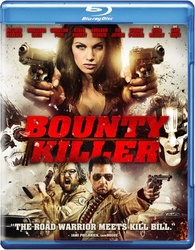 Where the hell did “Bounty Killer” come from and why didn’t this film get more attention? This is a “Mad Max” meets “Doomsday” with a vengeance. The film takes place in the year 2042 and is a non-stop action packed rollercoaster right that goes strong for 90 minutes. The lead, Christian Pitre, is smoking hot and really steps up as the heroine kick-ass female assassin, named Mary Death. She is backed by a pretty awesome cast including Matthew Marsden, Kristanna Loken, Eve, Beverly D’ Angelo, Kevin McNally and Gary Busey. The visual effects are quite awesome and the scale of the film is huge. Highly recommended and get ready to have a blast.

Official Premise: It’s been 20 years since the corporations took over the world s governments. Their thirst for power and profits led to the corporate wars, a fierce global battle that laid waste to society as we know it. Born from the ash, the Council of Nine rose as a new law and order for this dark age. To avenge the corporations reckless destruction, the Council issues death warrants for all white collar criminals. Their hunters — the bounty killer. From amateur savage to graceful assassin, the bounty killers now compete for body count, fame and a fat stack of cash. They are ending the plague of corporate greed by exterminating the self serving CEO and providing the survivors of the apocalypse with retribution. These are the new heroes. This is the age of the Bounty Killer!”

Arc Entertainment is releasing this film in two platforms, the first is just Blu-ray only and the second is a Blu-ray + DVD combo pack. The 1080p transfer looks very solid and works extremely with the non-stop action. The DTS-HD Master Audio 5.1 track also works well with the fast paced action and score. Unfortunately, I was really hoping that Arc was going to include some extras but this Blu-ray is absolute bare bones. I am very upset with that. I would have loved to see some featurettes on the production, specifically the visual effects and maybe even a commentary track.