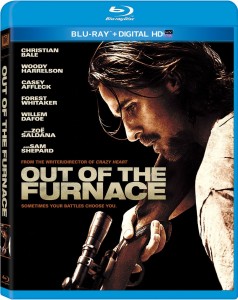 I am a huge fan of Christian Bale going back to the early days of “Newsies” and “Swing Kids”, but I did not see this film coming. It was completetly out of my radar when it was released and from its reception out of everyone elses as well it seemed. The film is directed by Scott Cooper (“Crazy Heart”), whom I respect very much. It also features an all-star cast including Woody Harrelson, Forest Whitaker, Willem Dafoe, Zoe Saldana and Sam Shepard. There is no shortage of talent. Still though the film just didn’t blow me away. The drama was there and the acting was great but I just felt like it was just going through the motions, never really grabbed me. For fans of the cast (and director) it will be worth checking out but I call this a one-timer and in five years I will have completely forgot about it.

Official Premise: From Scott Cooper, the critically acclaimed writer and director of Crazy Heart, comes a gripping and powerful drama about family, fate, circumstance and justice. Russell Baze (Oscarr Winner Christian Bale) leads a dead-end life – he works a meaningless steel mill job all day, and cares for his terminally ill father at night. When Russell’s brother Rodney (Casey Affleck) returns home from Iraq, he is lured into one of the Northeast’s most ruthless crime rings and mysteriously disappears. When the police fail to solve the case, Russell puts his life at risk in order to seek justice for his brother.

Fox delivered the film on Blu-ray with a combo pack including an HD Digital Ultraviolet copy. This is becoming the trend with pretty much any film Fox is releasing latetly and I really dig that. The 1080p transfer is quite solid. I liked the way the film was shot and it was nicely framed. The DTS-HD Master Audio 5.1 track worked well with the dialogue and Dickson Hinchliffe’s score. The special features are decent and contain four featurettes. “Inspiration” looks into the story behind the film behind made. “Scott Cooper” focuses on the film’s director. “Crafting the Fight Scenes” is a breakdown of a few of the films climatic moments. Lastly “The Music of Out of the Furnace” talks with composer Hinchliffe about his score.