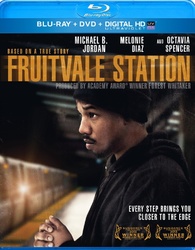 When it comes to dramas, I am usually not the first to run out. When I was young, I used to attend all the indie NYC film festivals and I got a bit flooded with all sorts of dramatic features. So “Fruitvale Station” didn’t interest me at all upon first glance. When I got this Blu-ray, I figured I would give it a chance it has a fantastic cast including Michael B. Jordan (“Chronicle”) and Academy Award® winner Octavia Spencer (“The Help”). Well I am glad I did because, I was quickly sucked into this very emotional drama and these actors mesmerizing performances. Keep an eye out for Jordan cause he is going to be huge. Highly recommend this film but just remember it is not light watching and very powerful 85 minutes.

Official Premise: Filmmaker Ryan Coogler makes his feature directorial debut with this drama centered on the tragic shooting of Oscar Grant (Michael B. Jordan), a vibrant 22-year-old Bay Area father who was senselessly gunned down by BART officers on New Year’s Day in 2009, and whose murder sent shockwaves through the nation after being captured on camera by his fellow passengers.

“Fruitvale Station” is a low-budget film with a low-budget feel that is not necessarily a bad thing but on Blu-ray, it doesn’t really stand out for me as a must have. The 1080p transfer is still very sharp and crystal clear. The DTS-HD Master Audio 5.1 track works very well with the film’s powerful score, which I loved. Anchor Bay released this film as a Blu-ray combo pack with DVD included, as well as a Digital HD Ultraviolet copy. In terms of special features, we only get two extras here but they are decent. “Fruitvale Station: The Story of Oscar Grant” goes into the true story behind this tragic event. There is also included a Q & A with the Cast and Filmmakers talking about the film and the true story behind it as well.