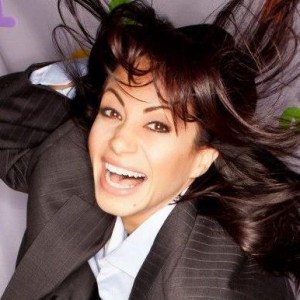 Genevieve Goings is known best for her role in the children’s music group Choo Choo Soul. They can be seen daily on Disney Junior with their catchy and fun yet educational kids songs. Choo Choo Soul released a CD of classic “Disney Favorites” earlier this year as well. She also started working with Fisher-Price and creating new music for their Little People brand. Genevieve took out some time to chat with Media Mikes again about her new gig at Fisher Price and her love for creating music.

FL Resident? Click here to enter to win tickets to an upcoming show for Choo Choo Soul in Miami, FL!

Mike Gencarelli: Tell us some background on how you got involved with Fisher-Price to write and produce brand new music for their Little People brand?
Genevieve Goings:  I was actually brought in by the incredibly smart and talented guy, Kevin Mowrer, who was consulting with Fisher Price on the re-branding of the iconic Fisher Price “Little People”. The Little People Brand has been around for 50 years, and is very well known, so they wanted to build on that by creating new characters with distinct personality traits. They put in a ton of work and are excited to introduce – Eddie, Tessa, Mia, Sofia and Koby! These wonderful characters are celebrated in their own ways, and all of us are sure to find a bit of ourselves in one, if not all of them! Fisher-Price really wanted music to be a big part of the re-branding, and that is where I came in. My first order of business was a to write a theme song for the overall brand. So we started from there and it sort of expanded into more work as we kept brainstorming and having a blast..

MG: Tell us a little bit about the characters?
GG: We decided to give each character their own song that explained their personality. Eddie want to run and jump and zoom everywhere. Tessa is the twirling ballerina, the girlie girl. Sofie loves art. Koby is super silly. Mia is shy and quite and likes to collect things. All these characters are really cool and have their own distinct personalities. I think that kids playing with them will find one that they relate to as well. 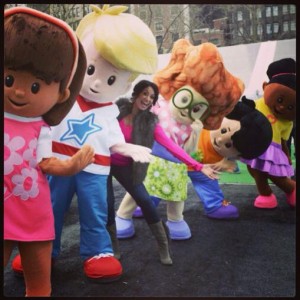 They are on YouTube right now for everyone to enjoy and you can also visit Fisher Price’s website to learn more.

MG: What do you have planned next with Fisher Price?
GG: I am so excited to announce that The Fisher-Price “Little People” have their very own animated web-series on YouTube! I scored the episode as well as writing the original songs within the show. I am also the voice of the teacher, Miss Hugg! Miss Hugg is sweet and very fun. She is a super cool teacher and is in charge, but is so nice and has a little bit of magic to her. While the children go out on their discovery adventures, she is there to keep an eye on them. She is musical and definitely sings while creating some magic around their discoveries. I am working on other interactive media for them as well, more coming soon!

MG: You wrote, recorded and produced these new songs, what was your most challenging aspect?
GG:  We say if it is not broken, don’t fix it right? So with Little People they are already so iconic and Fisher Price is the epitome of children’s toys. So I just wanted to make sure that it was really something great. So I tried to think outside of the box but also remain true to the brand and the company’s values. There was a little pressure in finding that perfect blend. They have been so awesome to work with since they do want to push the envelope a little bit outside of what is “traditional” music. But as you know, that is kind of what I do, which is create contemporary kids music that is kid cool and parent approved [laughs].

MG: Do you tap into your inner child to create these songs?
GG: Oh yeah! Absolutely. My song writing process is hysterical. I have my two dogs with me that total about 30 pounds together. 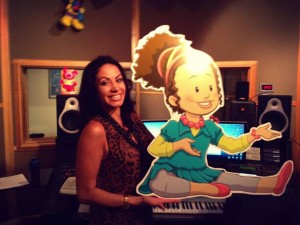 So I will start like I am just singing to them. Then I am dancing around and I have to think about if this would be fun to perform. I think if it is fun to listen to and also sing along to. When I write a song, I try and think about a child singing it. That is my goal to have that resonate with them and have them wanting to sing them after hearing it.

MG: I know you are touring with some shows this Fall, do you get to play your new Disney Favorite as well as your classic tracks from Choo Choo Soul?
GG: Yes, we do a mix of both. We do our Choo Choo tracks and also the Disney classics, since we don’t want to move too far from our train theme. We just did this great gig in Boston and we had backup dancers and we had these amazing big dance numbers to “Be Our Guest” and Under the Sea” and it was really fun! So keep an eye out on our “Events” tab on Facebook as we may be coming to a town by you.

MG: Tell us something cool about yourself that your fans may not know?
GG: Cool question! I actually write for Disney English, which is a school in China that teaches English as a second language. I have been writing for them for over four years and have done over 100 songs for them. This is like a whole other realm that I have been working on. It is so much easier to learn to speak another language if you can sing it. So that is something that has been a really amazing growing opportunity for me. It is such an interesting way to right songs. I am given a vocabulary and the words that I need to incorporate into the songs. I am also told that I am only able to use those words since its the only ones they know in English…and to make it song like a song from “Aladdin” [laughs]. So I get amazing assignments like that. I also wrote an entire phonics program for them to learn through sounds. I know they started airing these on Disney Junior France. So I am happy for others to get a chance to see these finally.

MG: Any more music projects in the works? 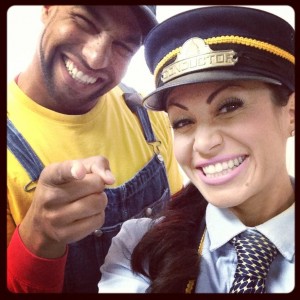 GG: I have thinking about doing my own project for a while. I have been doing this for other company, which has been absolutely amazing. I have covered tons of great topics ranging from vegetables to jumping to counting with Choo Choo Soul. We have the emotional expression songs about twirling, loving art and not being afraid to be shy with Little People. So there are a few other topics available [laughs]. I am going to be working on some songs and releasing them individually. I reached out a while ago on various social media sites and asked parents what were some of song topics that they wished we available and some great responses. That is the beauty of today’s media is that you can do stuff like this now without a big record label. So that will be coming up soon and I will definitely keep you posted Mike to share with your readers.

MG: I just wanted to close with saying “Thank You” because my daughter loves your music so much!
GG: Oh thank you, that’s so sweet. It’s amazing to just think how long it has gone. I do not think that Disney had in mind that it was going to last this long. Somehow though, with that combination of trains, the awesome animation and the music is really working out. We have such a blast performing and hope to continue for many more years to come.