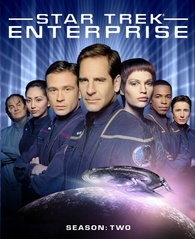 If you are a fan of “Star Trek: Enterprise” then you will know that in season two the show starts to get its legs. The first season was more a transition and them getting their feet wet. We picked up from the “Star Trek” classic cliffhanger ending of the first season with Captain Jonathan Archer (Scott Bakula) trapped in the 31st century. This season includes some great fan favorites including “Shockwave, Part II”, “Carbon Creek” and “Dead Stop”. There are plenty of connection introduced to original Star Trek series like with Klingons and even a Tribble. Speaking of other “Star Trek” series, there are several episodes this season which are directed by past cast alumni including Next Generation’s LeVar Burton, and Voyager’s Roxanne Dawson and Robert Duncan McNeill. So if you are a fan of this show that you should get ready to continue your journey abroad the Enterprise NX-01 with this impressive Blu-ray season release.

Official Premise: Where no one has gone before! Beginning with season one’s epic cliffhanger, experience the adventures of the Enterprise NX-01 crew as Captain Jonathan Archer (Scott Bakula) and his crew explore the far reaches of space long before the United Federation of Planets was formed. The crew is tested as Chief Engineer Charles “Trip” Tucker III (Connor Trinneer) is abducted while Science Officer T’Pol (Jolene Blalock) struggles with a life-threatening disease. Witness the real first contact of Humans and Vulcans, the return of a familiar Star Trek alien, and the origins of Archer’s early career – all leading up to the explosive finale.

The first season of “Star Trek: Enterprise” looks good and much better than its prior TV release but wasn’t up to the par in terms of the recent “Star Trek: The Next Generation” releases. This second season aimed to improve that and quite succeeded. The show looks great within each the 26 episodes from the series’ sophomore season. The 1080p transfer has issues here and there but ultimately you should be able to enjoy this season with no major issues. It is not “TNG” but still decent. The show goes with a striking DTS-HD Master Audio 5.1 audio track, which works with every warp speed jump and the show’s action. It also comes with numerous other languages including German and Italian 5.1 (Dolby Digital), and French, Castilian and Japanese Stereo Surround (Dolby Digital).

Like “Star Trek: Enterprise” season one release, this release comes packed with great mix of new and vintage extras. They are spread out over the six Blu-ray discs. The main star of the special features on the first disc is the newly produced cast reunion feature, “In Conversation: The First Crew,” is moderated by series co-creator/executive producer Brannon Braga and features cast/crew chatting about the show. This runs just over 90 minutes and is a must for any fan of the series. “Uncharted Territory” is another must watch, which is a three-part behind-the scene featurette focusing the show’s production for the second season with cast/crew interviews.

There are deleted scenes from six different episodes including ,”Minefield”, “A Night in Sickbay”, “Dawn”, “Stigma”, “Cease Fire” and “The Expanse.” There are some short archival interviews with Brannon Braga, Rick Berman, Jolene Blalock, and Scott Bakula discussing the episode “Stigma”. There are three “NX-01 Files” 04 focuses on Scott Bakula. “NX-01 File 05” look the character Hoshia and “NX-01 File 06” features Anthony Montgomery reflect on his role. There eight “Archival Mission Logs” included spread out over the six disc. They focus on the following topics included “Enterprise Moments: Season Two”, “Enterprise Profile: Jolene Blalock”, “Inside “A Night in Sickbay””, “Future Tense”, “Enterprise Secrets”, “LeVar Burton: Star Trek Director” and Enterprise Outtakes”. Lastly there is a short season two promo and a photo gallery included.