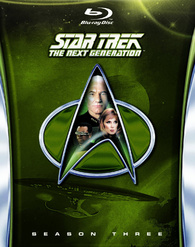 When I first watched the third season of “Star Trek: The Next Generation”, I was blown away. “The Best of Both Worlds” was one of the best storylines to come out of this series. I saw it long after it was originally aired and I have known about this arc but it still shocking and holds up as one of the best cliffhangers on TV. Overall, the whole series in general really running on all cylinders and kicking ass. The cast and the writers are settled in their roles and really delivered their best performances. Also available the same day is “Star Trek: The Next Generation – The Best of Both Worlds” for the mega “Star Trek” fans who are looking for a new edit of that fantastic storyline into a new-feature format. This is another very impressive release from CBS Home Entertainment and Paramount. They have been giving this series nothing but love since they started releasing these seasons. If you love this series, then this release is a must-buy!

“Star Trek: The Next Generation – Season Three” delivers absolutely perfect 1080p transfers of each episodes. These episodes don’t just look good. They look stunning. Top that with a flawless DTS-HD Master Audio 7.1 track for each episode and Trek fans will be nothing but thrilled. I wonder what Gene Roddenberry would have thought if he could have seen his creation presented like this. Alternate audio tracks also include an English Stereo Surround, French Mono, Italian Mono, Castilian Mono, German Mono and Japanese Mono tracks. If you have seen these episodes on TV or DVD, this give you the show like you have never seen it before due to this fantastic restoration which involved returning to the original film elements.

The special features are quite impressive for this season. The newly produced high definition extras (found mostly on disc six) include an all-new featurette called “Inside The Writer’s Room”, which is moderated by Seth MacFarlane. He leads a panel and a great discussion on the creation of the show’s acclaimed third season with some of today’s best science fiction television writers including Ronald Moore, Brannon Braga, Naren Shankar and Rene Echevarria. There is an entirely new multi-part documentary called “Resistance is Futile – Assimilating Star Trek: The Next Generation”, which really dives into the behind-the-scenes on the making of Season Three. There is a very nice tribute to Michael Piller, which includes never-before-seen interviews with cast, crew and more discuss his lasting influence on the “Star Trek” franchise. Rounding out the high-def extras is a new gag reel for fans, which is located on disc five.

Additional extras included are spread out over the six discs. There are four “Archival Mission Logs” including “Selected Crew Analysis Year Three”, “Mission Overview Year Three”, “Departmental Briefing Year Three: Production” and “Departmental Briefing Year Three: Memorable Missions”. There are four all-new audio commentary track spread out on the release. Disc one features a commentary track from Ron Moore on “The Bonding”. Disc three features features a commentary track from Ron Moore and Ira Steven Behr on “Yesterday’s Enterprise”. Disc four features the last two audio commentary tracks. The first is with Rene Echevarria and Mike & Denise Okuda on “The Offspring” and the second is with Ron Moore on “Sins of the Father”. If you are looking for audio commentary on the episode “The Best of Both Worlds: Part 1”, you should check out the stand-one release mentioned above. Lastly, there are also episodic promos available for each of the 26 episodes.