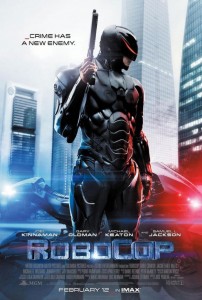 Here comes the obligatory comparison of the new “RoboCop” to the beloved ultra violent 1987 version. Sure this 2014 reboot comes up short in a lot of aspects that its 27-year-old sibling nailed. It lacks the wit and slights against our media driven culture. It’s satire of American politics isn’t quite as clever or absurdly funny. Also, the violence has been toned down; so don’t expect bullets to cause human bodies to erupt in blood and limbs to be blown off. And worst of all, you won’t leave the theater with any witty one liners. Despite all that, Padilha’s version is well written and a lot of fun.

While the original dropped us into a decaying, future Detroit, this one dumps us into a seemingly modernized Detroit. Regardless, it still puzzles me why a global company and it’s CEO would set up shop in a city with the country’s worst crime and poverty level. Omnicorp, headed by Raymond Sellars (Keaton), is having some difficulty pushing their crime prevention robots. I mean come on, who wouldn’t want robotic soldiers and goliath sized drones with dual machine guns patrolling the streets to keep America safe? If it’s good enough to keep Iran under our iron fist in 2028, then it’s good enough to help Americans sleep at night. So with the help of Dr. Dennett Norton (Oldman), Sellars plans on selling the American public on something else. They’ll combine a damaged human body with their military-grade robotics, to ease the minds of the public by giving them a robot with a conscience. Enter Detroit policeman Alex Murphy (Kinnaman). He’s barely being kept alive after an attempt on his life via a car bomb by a couple of corrupt cops and an underground crime boss. They’ll take what’s left of Murphy’s body, but mostly his mind, and combine it with the hardware of a killing machine. He’s an instant success at putting a dent in crime, but things go south fast when he begins to investigate his own attempted murder.

This movie changes up the tone and sometimes takes itself a bit too seriously, but some of the emotional depth it employs actually works. With this cast, it’s really hard to go wrong when wringing out some new twists on the characters. Oldman plays a great conflicted doctor with flashes of Commissioner Gordon towards the end. Keaton settles in well as a smug, evil corporate villain. Keaton needs to be in more movies as the protagonist. Samuel Jackson really steals the show as Pat Novak, an obvious poke at Fox News pundits. Jackson must have been the only one to have read this script and realize he needs to plant his tongue in his cheek. His role also proves my theory that he’s contractually obligated to drop at least one F-Bomb, censored or not, in every movie he stars in. As for Kinnaman as RoboCop…he’s alright. He’s not outstanding, but if you’re anticipating Oscar worthy performances, you’re in the wrong movie.

I’m not here to tell you that the original is a classic that should have never been remade. To be honest, there’s no real reason the original can’t be revisited or reimagined. The ‘87 version was alright, but not a groundbreaking masterpiece with a twisted lens on our future. The movie was a guilty pleasure, but it was behind the wheel when driving itself into the ground with sequels and two live action and animated series. It is easy to understand a fan’s concern that this new version could be a lifeless mockery, but the movie really does come off as a fresh product for the rebooted series. While I was hoping for a “Dredd 3D” style reimagining, this reboot kept me entertained and managed to rekindle the absurdity of a RoboCop.