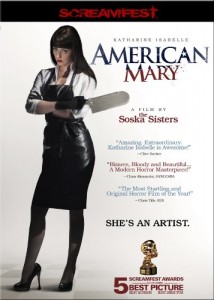 I have to admit prior to this film, I had never heard of the Twisted Twins aka Jen and Sylvia Soska. But I can’t turn down a good horror flick…and boy was this quite a suprise. “American Mary” is the follow-up to their indie hit “Dead Hooker in a Trunk”. They wrote, directed and even co-starred in this. I found myself almost mesmerized by the film and its slow yet steady pacing. It is gory, in-your-face and will leave you with an unsettled feeling in your stomach…but to me that means that it was successfully. This film was also recognized by Screamfest and when I see that label you know the film major potential. Keep an eye out for the Soska Sisters because they are going to be the future of the horror genre for sure.

Official Premise: “American Mary” is the story of a medical student named Mary who is growing increasingly broke and disenchanted with medical school and the established doctors she once idolized. The allure of easy money sends a desperate Mary through the messy world of underground surgeries which leaves more marks on her than the so-called freakish clientele. Appearances are everything.

Katharine Isabelle, known best for her role in the “Ginger Snaps” series, was absolutely amazing in this film.  You literally hung on her every word. If you are looking for a fresh and original horror film, then I will highly recommend this…just not for the squeamish. This DVD is rated R but I have heard that there is an uncut version, which is six minutes longer and I would have loved to seen that version for this release. The special features on the DVD are impressive.  “A Revealing Look at the Making of American Mary” is a great behind-the-scenes look into the film with cast/crew.  There is also very entertaining commentary track with the Soska Sisters, Katharine Isabelle and Tristan Risk.  If you enjoyed the film, this track is a great way to enjoy a second viewing.