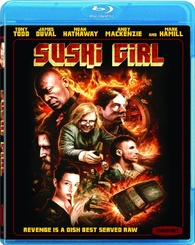 Let’s travel back to August of 2011, I was asked to interview the cast/crew of a little film called “Sushi Girl” that just finished production and looking for some early press.  So, we ended up chatting with thirteen members of the cast and crew over the next year, check out the interview series here. Since that time, I have seen this film five times now and it never ceases to blow me away. “Sushi Girl” is a very rare gem that deserves much more attention then it has received.  The film is well written by director Kern Saxton and Destin Pfaff (COO from TV’s “The Millionaire Matchmaker”. This script channels the grindhouse feel with the clever dialogue of Quentin Tarantino. There are countless twists and turns around every corner and will leave you with your mouth open. I cannot stress any more…DO NOT MISS THIS FILM.

Official Premise: Fish has spent six years in jail. Six years alone. Six years keeping his mouth shut about the robbery, about the other men involved. The night he is released, the four men he protected with silence celebrate his freedom with a congratulatory dinner. The meal is a lavish array of sushi, served off the naked body of a beautiful young woman. The sushi girl seems catatonic, trained to ignore everything in the room, even if things become dangerous. Sure enough, the four unwieldy thieves can’t help but open old wounds in an attempt to find their missing loot.

Let me give you a rundown of this amazing cast: Tony Todd (“Candyman”), Noah Hathaway (“The Neverending Story”), Jimmy Duval (“Donnie Darko”), Andy Mackenzie (“Shoot Em Up”), Mark Hamill (“Star Wars”), Cortney Palm (“Silent Night”) and David Dastmalchian (“The Dark Knight”). If that is not enough for you there is also other familiar faces including the legendary Sonny Chiba (“Kill Bill: Vol. 1”), Jeff Fahey (“Planet Terror”), Michael Biehn (“The Terminator”) and Danny Trejo (“Machete”).

Tony Todd easily delivers one of his best roles in his career as Duke.  He is sly, dark and methodical.  Noah Hathaway, who is best known for his roles as a kid with “The Neverending Story” and “Troll”, makes his return to film and really nails the role of Fish. What a scream, Noah! Andy Mackenzie is one hell of a major bad-ass as Max, but I recommend him to keep his socks on! Yikes! Mark Hamill, wow what a performance. We all know Mark as being Luke Skywalker in the “Star Wars” saga and voicing the Joker in various works of “Batman”. He literally transforms himself in this film and is almost unrecognizable.  Literally one of his most out-of-the-box roles to date.  He steals the show and makes this movie a must see just for his performance.

Magnolia released this film with fantastic results on Blu-ray.  If you are looking for a Blu-ray/DVD combo pack, Best Buy has that exclusive release available in stores and online.  The film has this certain grindhouse feel but doesn’t trade that for quality. The film looks amazing for a low budget indie. The Blu-ray 1080p really shines and is clear and sharp. Now the real seller on this release is the unbelievable DTS-HD Master Audio 7.1 audio track. It is very rare for a low-budget film like this to come with a track like this but these guys did not want to disappoint. Does this mostly dialogue driven film need a 7.1 track? Probably not. But it does rock the shit out of that track for sure. The dialogue is delivered perfectly and the action is aced.

The special features on “Sushi Girl” do nothing be leave you satisfied.  They start off with two commentary tracks. The first is a filmmaker track wiith Kern Saxton, Destin Pfaff, Neal Fischer, and Suren M. Seron. The group of them are very fun and really have a lot of passion for this project. The next track is a cast commentary track with Tony Todd, James Duval, Noah Hathaway, Andy Mackenzie, David Dastmalchian, Destin Pfaff and Kern Saxton. This is a real blast and you can tell that these guys are having a blast and loved working on this film.

Next up is kick-ass “Sushi Girl: A Documentary”, which runs an hour long. There is a lot of great behind-the-scenes footage mixed with some interviews. There is an alternate scenes for the ending, worth checking out but I am still a fan of the release ending.  Next there are over 15 minutes of outtakes, runs a little long but if you are a die-hard fan you would enjoy. “Producer’s Diaries” is some more behind-the-scenes footage and is very entertaining. If you want more interviews, then there is some footage from the film’s premiere at Fantasia Festival in Montreal and cast/crew interviews. There is a music video for “Victories and Consequences” by Send the Sages.

There are three faux TV Commercials with a “shot-on-VHS look” that loosely tie in to the film’s story. They are very clever and I enjoyed these very much.  There are also over 20 images including poster and promotional stills, as well as a behind-the-scenes gallery with another 100 stills. There are storyboards for the entire film, which I recommend to see how the film was planned out before shooting.  Lastly, there is four trailers including a green band and red band trailers. What else could you possible want to see on this Blu-ray release? These guys have not only delivers an amazing Blu-ray presentation, they also have jam-packed it with amazing and high quality extras. BTW don’t forget to watch through the credit to see Media Mikes in the credits! Thanks guys!