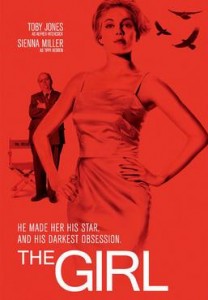 When it comes to HBO Films, I don’t care about the topic or anything, I am immediately interested. They always seem to impress with their high profile cast and edgy and in-your-face films, for example the recent “Hemingway and Gellhorn”. “The Girl” was nominated for three Golden Globes including Best Actor, Actress and Motion Picture – Made for Television. The film focuses on Alfred Hitchcock’s obsessive relationship with Tippi Hedren, his leading lady in “The Birds” and “Marnie”. “The Girl” stars Toby Jones as Hitchcock and Sienna Miller as Hedren. Both actors did marvelous jobs. They were both very committed to the roles and delivered an intense performance. I was blown away with Jones’ portrayal of good ole “Hitch”. Everything from his look, to this walk or that voice was a real score. Move over Anthony Hopkins! If you are a fan of Hitchcock, do not miss this release.

Official Premise: “The Girl” tells the story of the director’s obsessive relationship with his leading lady during the making of The Birds and Marnie. As he attempted to sculpt Hedren into the perfect blonde of his imagination, Hitchcock became obsessed with the impossible dream of winning the real woman’s love. Her rejection of his misguided attempts only added to his obsession, putting both their careers and personal lives in jeopardy. “The Girl” is a complex tale of power, obsession, and the price exacted for stardom.

I am a little disappointed with this film’s release, not the actual release itself but the fact that is only being released made to order on DVD, thanks to Warner Archive. HBO has had great success with their original films and I would have loved to see this get a proper DVD and even Blu-ray. The transfer looks stunning with its 16X9 widescreen aspect ratio. The audio track packs nice Dolby Digital 5.1 surround track, which is a step up from previous Warner Archive releases. The only special features included is an interview with Tippi Hedren, the star of the original “The Birds” and Marnie”. She reflects on working with Hitchcock and related to the film. It is way too short though and only runs about three minutes. I would have loved to see more extras surround this film itself with featurettes on the production, interviews with Sienna Miller and Toby Jones and even a commentary track.