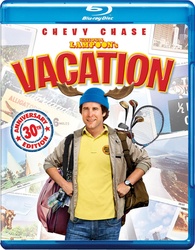 “National Lampoon’s Vacation” was a very important film of the 1980’s. It was a great kick-off for John Hughes, who then went on to making “The Breakfast Club”, “Ferris Bueller’s Day” etc. It was directed by Harold Ramis, who also gave us “Caddyshack”, “Groundhog Day” and of course starred in “Ghostbusters” series. But most importantly this movie introduced us to the Griswold family. I think that is the most important. There is not a year that go by that I do not quote this film or its sequel “Vegas Vacation”. Of course who doesn’t watch “Christmas Vacation” every Holiday! “Vacation” is where it all started and it is celebrating it’s 30th Anniversary with this new release. If you own the last Blu-ray from 2010, I wouldn’t recommend upgrading but if you don’t then this release is a must-own for any fan!

Official Premise: Everything is planned, packed… and about to go hilariously wrong. The Griswolds are going on vacation. In the driver’s seat is Clark Griswold (Chase), an Everyman eager to share the open road and the wonders of family togetherness, and his wife Ellen (D’Angelo). Myriad mishaps, crude kin (Quaid), encounters with a temptress (Christie Brinkley), financial woes, Aunt Edna (Imogene Coca) on the roof, one security guard (John Candy) and 2,460 miles later, it’s a wonder the Griswolds are together. There’s never been a family vacation like it. Except maybe yours. And that helps explain why the classic comedy remains so popular and so very funny.

“National Lampoon’s Vacation: 30th Anniversary Edition” includes the same transfer from the 2010 Blu-ray release which is quite impressive. The 1080p transfer with an aspect ratio of 1.78:1 is quite strong and hold up real well. The color are sharp and the even though the film is screaming 1980’s it still looks sharp. The DTS-HD Master Audio Mono track included works well with the dialogue and music in the film. I would have loved to seen this beefed up a little though to a 5.1 surround track for this anniversary release.

On the previous 2010 Blu-ray release, the special features were not anything to call home about. Well on this 30th anniversary edition, we are only getting one new featurette called “Inside Story: National Lampoon’s Vacation”. It is a nice 85-minute trip down memory lane with the cast/crew but I would recommend purchasing this Blu-ray just for this one featurette, especially if you owned the prior release. The rest of the extras are the roll-over from the 2010 Blu-ray including a brief introduction to the film with Chevy Chase, Randy Quaid, and Matty Simmons. There is a fun audio commentary track with Harold Ramis, Chevy Chase, Randy Quaid, Anthony Michael Hall, Dana Barron, and Matty Simmons. Fans should enjoy this track. Lastly there is a theatrical trailer.