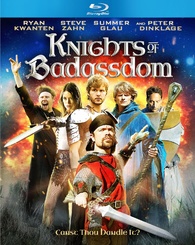 With a title like “Knights of Badassdom”, how can you really go wrong? With a cast like Ryan Kwanten (“True Blood”), Peter Dinkage (“Game of Thrones”), Summer Glau (“Firefly”), Steve Zahn (“Saving Silverman”), Danni Pudi (“Community”) and Jimmi Simpson (“House of Cards”), how can you really go wrong? Unfortunately “Knights of Badassdom” was shot back in 2010 and has since sat on a shlef waiting to be released. To make things worse, the film was directed by Joe Lynch (“Holliston”, “Wrong Turn 2”) but this film that we get today is not his film. This Blu-ray contains a brutalized producers cut, which is just sad to me. I enjoyed watching the film but I know it could have been so much better. The cast alone makes this worth watching for sure, everyone is gold here.

Official Premise: “Knights of Badassdom” follows three best friends and dedicated LARPers (Live Action Role Players) as they take to the woods to reenact a dungeons and dragons-like scenario fresh out of the mythical Middle Ages. Trouble arises after they unwittingly conjure up some serious evil in the form of a blood-lusting Succubus, from the pits of hell. Fantasy and reality collide on the Fields of Evermore in an all-out epic battle of make-believe wizards, demons and assorted mythical creatures.

The 1080p transfer for this looks decent, I wasn’t really blown away. For me the main start was the DTS-HD Master Audio 5.1 track, I was IN LOVE with this film’s score and music. Whether you love this film or not I highly recommend checking out the soundtrack to this film, it is really epic and this track really nails it (check out our review here). In terms of special features, the only meaty extra is a panel from San Diego Comic Con. There is some promotional material including some interviews and fun YouTube shorts included. There is also an interview with the director Joe Lynch talking about the film (in standard definition). Lastly there is a trailer included. Would have loved to see a featurette on the music and the visual/practical effects.