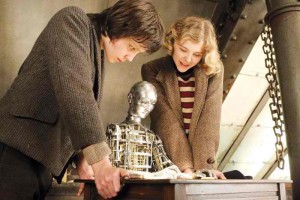 “Hugo” is a very enchanting tale with amazing storytelling.  It is really rare that you watch a film and it takes you on a two hour journey.  At the 2012 Oscars, “Hugo” was awarded five Academy Awards for Best Cinematography, Best Art Direction, Best Visual Effects, Best Sound Editing and Best Sound Mixing. I felt that it also deserved the Best Director and Best Picture awards as well. I feel that Scorsese did an amazing job with this picture. This film gets better and better which each viewing and looks spectacular on Blu-ray.

The film follows Hugo Cabret (Asa Butterfield) who lives in a Paris train station. He lives to maintains its clocks and roams within in the walls and above the trains platforms. He has no family since his father’s death and his uncle, station’s timekeeper, who took his in and then vanished. Hugo has only one thing left from his father, a mechanical person, who was created to write independently but needs a special key to do so. Hugo wants to find that key in hope to find a message from his late father. He meets Isabelle (Chloë Grace Moretz) and the two embark on an unexpected journey.

The Blu-ray presentation is just absolutely flawless. The 1080p video conversion is absolutely perfect. The colors are extremely sharp and showcases this film’s amazing cinematography perfectly. The audio boasts a fantastic DTS-HD MA 7.1 track. It also works very well with Howard Shore’s score, which is so perfectly intertwined within the film. Also included in the Blu-ray combo pack is with a DVD copy of the film. They also include an Ultraviolet copy of the film, which is a great feature. The film works well in 2D but I feel that it loses a lot of the atmosphere created from the 3D version. I definitely prefer the 3D version over the 2D version.

The special features are great but are lacking a commentary track from Martin Scorsese and cast. The first feature is called “Shoot the Moon (The Making of Hugo)”, it runs about twenty minutes and includes great both cast and crew discussing the film and its production. “The Cinemagician, Georges Méliès” focuses on the filmmaker and his role in this film. “The Mechanical Man at the Heart of Hugo” is an informative feature that focuses on the history of automaton and its use in the film. “Big Effects, Small Scale” it is a brief look at the film’s effects, I would have loved for this to be a lot longer since the effects are critical in this film. Lastly there is a short piece about the Station Inspector, called “Sacha Baron Cohen: Role of a Lifetime”, short but sweet. Overall great features for a great film.

One Reply to “Blu-ray Review “Hugo””