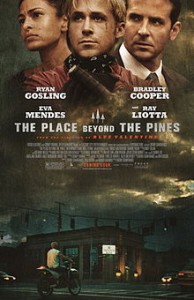 There’s nothing like a good old fashioned carnival to use as the backdrop for a film. In “The Place Beyond the Pines” we are introduced to a trio of daredevil motorcycle riders, led by the very blonde Handsome Luke (Gossling). After his last death-defying feat of the evening he spots a woman watching him. “Do you remember me,” she asks.

Incredibly overlong with a plot twist you can spot from the back of the theatre, “The Place Beyond the Pines” wastes strong performances in a sea of cliché’s and coincidences. It seems Luke does remember the young lady (Mendes) from a brief tryst the last time he was in town. It seems, to paraphrase the Cher song Gypsy’s, Tramps and Thieves, “three months later she’s a gal in trouble and she hasn’t seen him for awhile!” Even though his baby mama is now living with another man in a serious relationship Luke wants to be a part of his newly found son’s life. He quits the carnival and goes to work for a local mechanic. Looking for a way to make some extra money he asks his boss. His reply? “Bank Robbery.” It seems many years ago the boss needed some money quick and robbed a few banks before hanging up his gun and mask. The boss figures out that, with his motorcycle skills, Luke would make a great robber. And he does. For a while. Enter rookie police office Avery Cross (Cooper), another man with a baby boy at home. When their paths meet things don’t go well for either man.

Basically a two act play, “The Place Beyond the Pines” attempts to be a clever puzzle but by the time the pieces are put into place you just want to sweep the whole thing off the table. In Act One we learn that after Cross takes down Handsome Luke his star begins to rise. The son of a state chief justice, Cross has a law degree but feels he can make a bigger difference on the street. He’s a politician at heart, using his new found popularity to advance his career. Act two takes place fifteen years later, with Luke and Avery’s sons meeting in high school. They have two things in common – a love for weed and the fact that both boys look to be about 30 years old. If you can guess where the film is heading (like I did 90 minutes in) congratulations. If not, you’ve only got another hour to go!