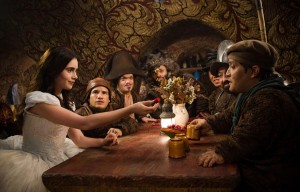 Director Tarsem Singh has made a family film that is just charming. Which is fitting for a retelling of Snow White. Children will love it and adults will definitely enjoy it if a slightly offbeat, if not ground breaking, storybook tale is what they’re up for.

Julia Roberts playing the evil queen sets up the story, narrating a beautifully animated opening sequence where we learn her step daughter Snow White’s (Lily Collins) father was lost in the dark forrest and now she must raise the princess, who she keeps locked away in the castle under the pretense that she’s too naive or crazy to be out in the world. Let alone to rule the kingdom that’s rightfully hers.

At eighteen years old, Snow decides to test her stepmother’s image of her and ventures outside the castle to learn the toll the wicked Queen’s vanity is taking on her subjects. And luckily she also bumps into a charming Prince.

Roberts mostly steals the show in her villainous role with the writers lending a motivation to her quest for youth and beauty in the form of Armie Hammer’s rich and handsome Prince Alcott, whom she aims to wed despite his affection for Snow. Never before had I seen Roberts’ trademark booming laughter used for evil purposes, but she should do it more often. Adding to her impact are the gasp inducing gowns she wears by the late designer Eiko Ishioka (Bram Stoker’s Dracula).

New-comer Lily Collins definitely looks the part of Snow White, though she’s given less to work with than her co-stars. After Roberts, Hammer in particular gives a wonderfully committed performance to his princely role which calls for him to be charming but also very silly at times which many young actors might not have been able to do with the same degree of sincerely that he brings here.

After the Queen tries and fails to have Snow White killed by her servant (Nathan Lane), the young princess of course is left in the care of a troop of seven dwarves. Here they’re bandits instead of miners, but going with the Disney method, the dwarves are mostly identified by a simple character trait (Grub eats, Chuckles…chuckles, etc). Again, this all works, even if it’s not very original.

If there’s an overall flaw with Snow’s story it’s that Collins isn’t exactly fit to sell the transition she’s meant to make from meek palace dweller to strong bandit-trained fighter. Nor are the stakes very high. A tiny village serves as the whole kingdom the princess is meant to be fighting for. Though perhaps I’ll be grateful for this when Snow White and the Huntsman releases its armies on audiences this summer. We’ll see.

Still the gentle humor, dazzling costumes and sweet nature of this film are enough to recommend it to anyone who enjoys a well crafted fairy tale.