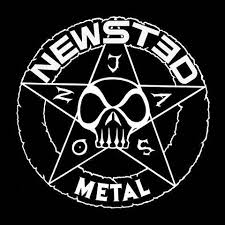 Jason Newsted the former bassist for heavy metal legends Metallica has released his debut solo EP titled “Metal”. The EP features 4 brand new tracks written by Newsted who handles bass/guitar and vocal duties along with drummer Jesus Mendez Jr. and guitarist/bassist Jessie Farnsworth. The EP is being released via Newsted Chop House Records and was also produced by Jason. If “Metal” is just a taste of what’s in-store from Rock and Roll Hall of Fame inductee Jason Newsted then I can’t wait to hear what’s next.

All four tracks featured on “Metal” are blistering rock tunes over flowing with Motorhead like grit. The Ep’s opening track “Soldierhead” puts the pedal to the floor and doesn’t look back while the track “King of the Underdogs” snakes its way in and out of edgy breakdowns and catchy lyrical passages. Fans of metal and hard rock will definitely want to pick up the “Metal” EP to hold them over until the LP version of the album is available and with the recent addition of Staind guitarist Mike Mushok, Newsted are sure to be a force to reckon with.