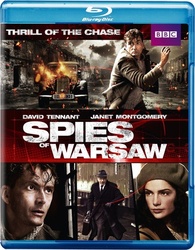 Who loves Doctor Who? Who thinks that David Tennant was brilliant as the Doctor  Well if you are like me then you are going to jump at the chance to see him in another amazing role. “Spies of Warsaw” is based on the book by historical spy novelist Alan Furst and is broken down into a two-part mini-series drama. This BBC adaptation packs plenty of espionage, betrayal and intrigue and most importantly did I say David Tennant already? I forget. He is fantastic in the role and the spy genre really suits him quite well. This is a must see for all his fans!

Official Premise: David Tennant (Doctor Who) and Janet Montgomery (Entourage) keep you guessing in this intense spy thriller based on the Alan Furst novel. Set in Poland, Paris, and Berlin at the onset of World War II, the aristocratic French attaché to Warsaw, Jean-François Mercier (Tennant), feels drawn to the world of espionage and intrigue while he engages in a passionate, illicit love affair with Anna (Montgomery), a Parisian lawyer for the League of Nations.

BBC Home Entertainment delivers a fine Blu-ray presentation here. The 1080p transfer is very crisp and captures the action very well. The audio track is good but could have used a small upgrade beyond its DTS-HD 2.0 track. It still works well with the film’s content. There is also a surprise Ultraviolet digital copy included inside the case. There was no mention of it anywhere else, so this was a real treat. I would have loved to see much more in the special features department. Instead we only get one feature, “David Tennant on Spies of Warsaw”. It is still worth checking out if you are a big fan. Since the film was shot on location, I would have loved to see behind-the-scene featurettes.