I first met Jason Vivone in 2000 when, after a mutual friend introduced us, he cast me in a film he was shooting locally in Kansas City.  A year later he cast me as Dave Moss in his stage production of David Mamet’s “Glengarry Glen Ross.”  One day while reading lines at his apartment I couldn’t help but notice a nice selection of guitars displayed in one room.  A guitar player myself, I jokingly asked Jason if he was any good.  “I get by,” was his reply.  Like a fox!  This week Jason, along with his band the Billy Bats, will be representing Kansas City at the International Blues Challenge in Memphis.  Before he and the band headed to the Bluff City Jason took some time to talk with Media Mikes.

Mike Smith: What inspired you to pick up a guitar?
Jason Vivone: My grandma had a Gibson acoustic guitar she always kept in the case. When it was time to play there was this whole ritual – I had to sit down first, then she would take it out of the case, then she would play. I don’t know why this is but she had a piano ,too and there was no ritual to the piano. It was just a piece of furniture you could walk by and make sing and then go on with what you were going to do – go to the kitchen, feed the cat, whatever.

MS: Was there a certain kind of music that you wanted to play?
JV: I liked songs with stories. You could close your eyes and invent a movie just by the music and the words and the feel of the thing.

MS: What drew you to the blues?
JV: I liked the emotion of blues. And that doesn’t mean just the sad stuff. I liked the swaggery stuff. The 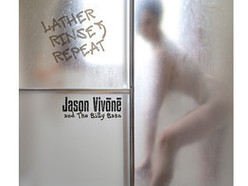 upbeat stuff, too. The tunes I fell in love with all felt like the singer walked into your house and took a chair and said “Lemme tell you about my baby…”

MS: You’ve also had success in filmmaking and theater. Have you put those on the back burner for now?
JV:  I suffered a pretty serious concussion and whiplash from an automobile accident a while back. It can limit my physical endurance sometimes. That’s why I’m playing the cigarbox guitar so much. A regular six string guitar gives me an incredible headache after a couple songs. Right now, I wouldn’t have the stamina or daily concentration to direct and produce a theater piece. We are, however, fortunate that a local burlesque artist, Sophie Sassafras, has decided to use a few of our tunes in an upcoming show. It feels like I am back in a theater production again. As far as film work, there are a few video projects in discussion for the Bats this upcoming year.

MS: How did the Billy Bats come together?
JV: I had played guitar all through high school and college. I got a job in Branson and it killed my taste for playing. It seemed like everywhere I went there were rip off artists. I thought the problem was me. I quit playing for ten years. In 2005, I was directing a play and we needed some guitar music. I just hired myself to save some money and found the guitar still loved me. 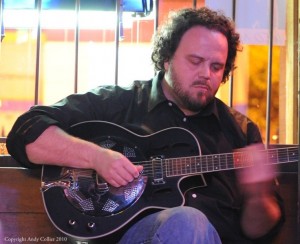 MS: You’ve competed as a solo artist at the International Blues Challenge in the past but this is your first time with the Billy Bats. What do you remember about your first time there?
JV: It was fun. Lots of talent. Great food. And a rich history. I highly recommend it.

MS: How did you earn this shot in the Challenge?
JV: We competed in the Kansas City competition facing off with – I think – a dozen other bands. Some great musicians all around. The judges gave us the nod of approval.

MS: Are you familiar with any of the other bands you’ll be competing with?
JV: We’ve been checking out the other bands at the IBC home page at blues.org. We really enjoy the folks who are putting their signature on a sound. And you have to hand it to the International bands — always a high degree of talent from them.

MS: What do you have planned after Memphis?
JV: We have some new things we want to incorporate into the act. The blues world has a wide influence and there are motifs and sounds we really want to explore. New Orleans feels. String band traditions. Vocal groups. We have some new material to start work-shopping and hopefully we will record this year.