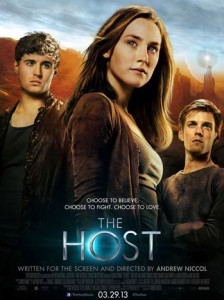 In the future, after wars have decimated the planets, ours is visited by an alien race that begins to take over our bodies, making everyone happy and polite. However, not everyone has been turned. As we meet Melanie (Ronan) she is being chased by several of the nice-guy aliens, only to hurtle herself out of a window. Surprisingly, despite the fact that “almost every bone has been broken and every organ damaged” (her teeth are still remarkably straight and even) Melanie has survived the fall. The “Healer” that examines her cuts a small hole in her neck and inserts a “soul”…the organism that has made the human race so docile. When she recovers Melanie renames herself “Wanderer” and begins living a docile life. However, deep inside Melanie’s personality and thoughts remain. But which one will emerge and which will be destroyed?

Horribly written with so many plot holes you could drive a truck through them, “The Host” is the latest work of “Twilight” author Stephenie Meyer. As the film progresses we get a glimpse of Melanie’s past…looking after her brother Jamie (Chandler Canterbury)…meeting and falling in love with Jared (Irons)…longing for those good old days on the Louisiana bayou. The majority of the film deals with Melanie and “Wanderer” (in the new world everyone is addressed with their new assignment on Earth – the “Healer” is known as Healer Fords, the aliens that are on “Wanderer’s” tail are known as Seekers. Diane Kruger is THE Seeker, a being who will stop at nothing to get to Melanie hidden deep inside. As the film progresses Melanie reunites with her Uncle Jeb (Hurt), though as she is visibly an alien there is an obvious lack of trust. Wait a minute…did you say she was VISIBLY an alien? Yes indeed. Apparently one of the side effects of having a soul take over your body is the appearance of beautiful blue eyes, shining brighter than a star. Which means unless you’re Yancy Butler or Jeff Fahey you have to hide your eyes lest you be discovered. Or wear sunglasses!

I feel so bad for the cast of this film because they are trying so hard. Ronan is constantly arguing herself, which gets funnier as she goes along because, as Melanie was from Louisiana, on occasion her “inside” voice has a little bit of a twang. But only occasionally. The eye thing gets really boring after a while, especially when director Niccol insists on tight close ups of Melanie’s face where, after a dramatic pause, she opens her eyes and stares blue darts into the camera. As the Wanderer (or “Wanda” as she’s now called by the earthlings) gets closer to Jared she and Melanie argue more. When Jared kisses her she slaps him…it’s like an internal battle…Melanie can’t stand the idea of another woman kissing her man…even when she IS the other woman. As the story goes on and the Seekers – led by THE Seeker – gets closer, you can’t help but wonder if there isn’t a Discovery Eye Center anywhere on the planet that stocks contact lenses? Hell, I could walk into Spencer Gifts tomorrow and get a set of beautiful blue contacts. Or a pair of sunglasses. But then I wouldn’t learn a valuable lesson about life, love and realizing I’m never getting back the two hours I invested in this film.

I really feel sorry for writer/director Niccol. Even though it’s noted that the film is based on a novel, the movie poster proudly proclaims the film was written and directed by Niccol, who actually DID write the brilliant “Truman Show.” If I was him I’d buy every poster I could find and destroy them!

On the positive side, the cast is game, the special effects not too cheesy and the scenery is lovely to look at. With any color eyes!